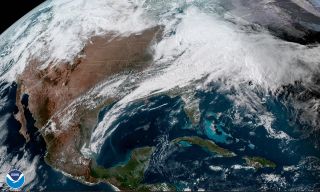 Clouds gather over the northeastern U.S. in this image captured today (March 1) by the GOES-East satellite.
(Image: © NOAA)

Recent warm temperatures in the northeastern U.S. might have convinced you that spring is on the way, but winter isn't done quite yet.

An area of low pressure currently brewing in the Atlantic off the U.S. East Coast is expected to quickly develop into a powerful nor'easter — an intense storm moving from the Northeast — beginning tonight (March 1) and lasting well into Friday (March 2), the National Weather Service (NWS) reported early this morning. The major storm will bring high winds, flooding, and heavy rains and snow, affecting coastal states from Maine to Virginia, according to the NWS.

This type of fast-forming storm is known as a "bomb cyclone" for the process that shapes it, called "bombogenesis." This process causes the storm's central low pressure to plummet by at least 24 millibars (a measurement of atmospheric pressure) in 24 hours, according to the National Oceanic and Atmospheric Administration (NOAA). The pressure of this particular bomb cyclone is expected to drop by about 30 to 35 millibars in 24 hours, Greg Carbin, branch chief of forecast operations for the NWS' Weather Prediction Center, told Live Science. [Bombogenesis: What's a 'Bomb Cyclone'?]

"Bombogenesis" combines the word "bomb" with the meteorological term "cyclogenesis," which means "storm formation." During bombogenesis, interactions between masses of cold air and warm air can provide a swift power-up to a midlatitude cyclone, whipping it into an intense storm with hurricane-strength winds.

Meteorologists with the NWS started to see the signs of an emerging coastal storm as early as Feb. 25, Carbin said.

"As we went into Monday, things became even more clear, as far as the system evolving and deepening, and producing a wide array of hazards and dangerous weather," he explained.

This powerful storm will bring high winds that could reach speeds of up to 70 mph (113 km/h) throughout Friday, affecting coastal areas from New York City to Boston, along with wet snow and heavy rain, The Weather Channel reported. Parts of western and central New York into northern Pennsylvania will likely see the most snowfall, with accumulations of over 12 inches (30 centimeters), according to The Weather Channel.

But coastal flooding will be the storm's greatest hazard, with well-above-normal water levels rising in parts of Boston and surging along the entire Massachusetts coast, Carbin added.

Earlier today (March 1), the NWS issued a coastal flood warning for the eastern Massachusetts coastline, to remain in effect from 9:00 a.m. local time on Friday to 3:00 a.m. on Sunday. The agency warned of storm surges reaching "life-threatening" depths — as high as 4 feet (1.2 meters) by Friday evening high tide — and added that structures along the shoreline would likely suffer "severe damage" and that homes in vulnerable areas could be completely destroyed.

"This is a very dangerous storm, and evacuation of some neighborhoods will likely be necessary," NWS representatives said in the flood alert.

The last bomb cyclone to strike the eastern coast of the U.S. wasn't all that long ago. Bombogenesis triggered a massive storm on Jan. 4, bringing heavy snow and high winds to the Mid-Atlantic and Northeastern states. When temperatures plunged as far south as Florida, snow accumulated in Tallahassee for the first time in nearly three decades. And snow wasn't the only thing falling in the chilly Sunshine State — the extreme cold froze local iguanas, leaving the ground littered with little green bodies after the lizards tumbled from the trees.