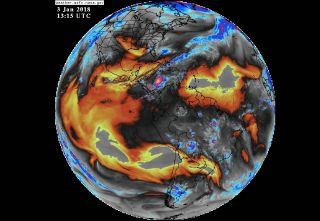 Just when you thought the weather couldn't get any worse, The Washington Post hits us with "bomb cyclone." That's right: Forecasters suggest this "bomb" will make the U.S. East Coast unbearable for many.

How does a system reach bomb-cyclone status? Its atmospheric pressure must drop so rapidly — at least 24 millibars in 24 hours, according to the National Weather Service (NWS) — that it explodes in strength.

"This can happen when a cold air mass collides with a warm air mass, such as air over warm ocean waters. The formation of this rapidly strengthening weather system is a process called bombogenesis, which creates what is known as a bomb cyclone," the NWS said.

Enter the polar vortex — a spinning mass of cold air that typically encircles the North Pole. When the system is strong, it treks around the North Pole in a relatively circular shape, bound on the south by the jet stream, according to David Roth, a forecaster for the NWS Weather Prediction Center in College Park, Maryland. "Since the [winter] solstice, the polar vortex has been weaker," Roth told Live Science, adding that "it looks like an amoeba right now." This planetary-scale phenomenon is partly driving the current winter storm and meteorological bomb. That's because the frigid Arctic air seeping from the vortex creates what meteorologists call troughs, or low-pressure areas.

The low-pressure system is moving near the Gulf Stream, which stays toasty all year. The temperature gradient between the two is amplifying the pressure drop, Roth said. Adding to this temperature difference is the orientation of the upper trough, or the low-pressure at about 30,000 to 40,000 feet (9,100 to 12,200 meters): This trough is negatively tilted (like a backward slant), which makes the system even stronger, Roth said.

During these bomb-cyclone events, winds can whip up fast, spinning toward the system's low-pressure center. Snow and blizzard conditions can follow, according to The Weather Channel.

The area of rapidly dropping pressure has already formed off the east coast of Florida this morning (Jan. 3) and will move northeastward, dropping snow over the southern mid-Atlantic coast by tomorrow morning (Jan. 4), according to the NWS. Snow is also forecast over parts of New England by tomorrow morning, with blizzard conditions possible over eastern New England by late Thursday.

In fact, on Friday, record-low temperatures are expected for most of the Mid-Atlantic and Northeast, where highs will hover in "the single digits and teens," the Post reported.