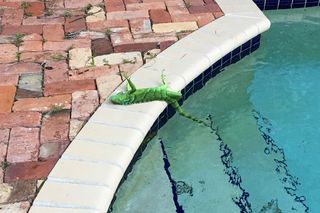 You know what they say: When it rains, it pours — and when it snows in Florida, it hails frozen iguanas.

"When the temperature goes down, [iguanas] literally shut down, and they can no longer hold on to the trees," Ron Magill, wildlife expert and communications director for Zoo Miami, told The New York Times. "Which is why you get this phenomenon in south Florida that it's raining iguanas." (This isn't even Florida's first iguana rain — a similar event occurred in 2008.)

Iguanas, like other reptiles, are ectotherms (also known as being "cold-blooded"), meaning the temperature outside strongly influences their body temperatures. When the outside temperature drops, preservation of an ectotherm's body temperature becomes the No. 1 priority. Creatures like iguanas and turtles thus conserve energy by slowing their metabolisms and almost entirely stopping moving; this can lead to the sort of self-imposed paralysis (known as torpor) seen in Florida.

As temperatures warm, the iguanas will thaw and eventually start moving again, Kristen Sommers, who oversees the nonnative fish and wildlife program for the Florida Fish and Wildlife Conservation Commission, told the Associated Press. For this reason, it's recommended that people don't move or touch the critters.

In other ectotherm news, hundreds of sea turtles spotted near the Padre Island National Seashore near Corpus Christi, Texas, suffered a similar cold-paralysis outbreak earlier in the week. National Park Service researchers removed the turtles form the frigid water and placed them in a holding area (with some plastic kiddie pools) to revive.