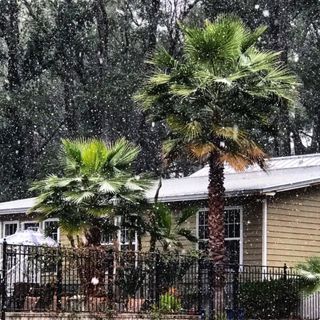 On Jan. 3, Floridians got a rare glimpse of snow falling on palm trees.
(Image: © Brennan Juhan)

It may not be much – just 0.1 inches (0.25 centimeters) – but it's the first measurable snowfall Tallahassee, Florida, has seen in 28 years.

The coating of white stuff over some northern parts of the Sunshine State, as well as southern Georgia, came courtesy of a storm system that is expected to rapidly strengthen as it moves up the East Coast, bringing strong winds and potentially heavy snowfall. Because of this "bomb cyclone," as it is known, forecasters have issued winter storm warnings from northern Florida to New England, a rare occurrence.

Florida is typically more synonymous with the snowbirds who flee frigid northern winters for the state's balmy beaches. But Florida, especially its northern reaches, can certainly see temperatures drop when cold air invades from the north, as it has over the last few days. [Earth in the Balance: 7 Crucial Tipping Points]

Typically, though, such cold air means conditions are too dry for any snow to fall.

And when there is snow, it usually hasn't been cold enough for long enough for roads and other surfaces to be sufficiently chilly for flakes to stick.

"It has to be cold enough to accumulate," Mark Wool, the warning coordination meteorologist at the National Weather Service (NWS) in Tallahassee, told Live Science. "That’s why it's so rare."

But with this low-pressure system developing off the Atlantic coast of Florida, moisture was pulled far enough westward to provide the fuel for snow and the area — like the rest of the eastern half of the country — has "had an unusually long stretch of cold weather," he said. So the snow "started sticking right away."

The snow lasted only about an hour and reached a mere 0.1 inches at the NWS office and the airport (the official station for record keeping), though higher amounts were reported farther north and east.

Officials closed portions of the highway, and schools were canceled out of an abundance of caution, Wool said, as freezing rain that preceded the snow made some roadways slick.

But the sun has already come out there and temperatures have risen above freezing, so "it's already melting away," he said.

The last time Tallahassee had measurable snow was in December 1989, when 1 inch (2.5 cm) fell on the city. Since then, they've had some traces of snow and accumulations of ice, most recently in 2014.

The most snow Florida's capital has ever seen was 2.8 inches (7.1 cm), which fell in 1958. One of the rarest snowfalls in the state's history came when flurries fell across South Florida — even at Miami Beach — on Jan. 19, 1977, the first time that had happened in recorded history, according to the NWS. That snow also came after a prolonged blast of Arctic air.

As the current storm develops, its central pressure is expected to quickly meet the criteria for a process called bombogenesis, when pressure drops at least 24 millibars in 24 hours. (Standard atmospheric pressure, or the weight of the air at sea level, is about 1,013 millibars). That steep drop causes air to come rushing in to fill the void, which creates strong winds.

The storm is also expected to drop potentially heavy snows along parts of the East Coast, though exactly how much snow will fall will depend on how closely the storm hugs the coastline. [6 Unexpected Effects of Climate Change]

Snowstorms and cold snaps — particularly in rare places like Florida — are often used by climate change doubters in attempts to debunk the concept of human-caused climate change, that is, the established rise in Earth's temperatures because of heat-trapping greenhouse gases. But both will continue to occur even in a warmer world, since Arctic air will remain relatively cold compared to lower latitudes and winter will still occur. However, cold snaps that lead to record lows will become less and less likely as Earth’s fever runs ever higher. Record highs have already been increasingly outpacing record lows in the U.S., currently by about 2 to 1. And a 2016 Climate Central research report found that winter precipitation was increasingly falling not as snow, but as rain in many states across the country.

Studies in recent years have shown some remarkable warming-related snow trends, though. For instance, areas around the Great Lakes are in prime lake effect snow territory, and snow amounts there may actually increase for a while, according to research and recent trends.

The lake effect happens when a sudden rush of cold air meets the still warm, unfrozen waters of the lakes, typically in late fall. The water evaporates into the cold air and falls as snow downwind. As lake temperatures rise, evaporation increases, which means more moisture is available to fuel snows when an Arctic blast comes along.

But eventually, temperatures will become too warm to support snow, particularly in the fall. Warming could push the prime lake effect season later into the winter as the lakes stay warmer longer.

A 2014 study that looked at how warming might affect the biggest snows – the Snowpocalypses and Snowzillas – found that extreme snowfalls might account for a bigger proportion of all snows for a time. The reason is because extreme snows happen in a narrow, Goldilocks-esque temperature band: if it's too warm it rains, and if it's too cold, the region is too dry for whopping snow totals.

As temperatures increase overall, they eat away at the range for all snow to form faster than the one for extreme snow, so blizzards drop off less quickly than snows overall.

What's more, snow could be wiped out at the same rate in regions with mild temperatures that rarely see snow. So, enjoy those snowflakes while you can, Florida.