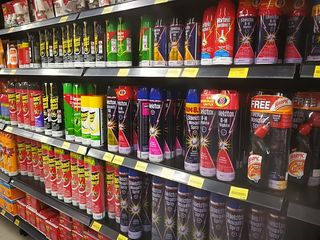 Despite new warning labels on "bug bomb" products, Americans are still injuring themselves with these at-home pesticides, according to a new report.

Bug bombs, more formally known as "total release foggers," are pesticide products that are designed to fill an area with insecticide; they are often used indoors to kill cockroaches, fleas and other pests, according to the Centers for Disease Control and Prevention (CDC). The chemicals in these products can make people sick when used incorrectly — for example, people exposed to these products have reported symptoms such as coughing, respiratory irritation, nausea or vomiting, the CDC said.

In 2012, the Environmental Protection Agency (EPA) made changes to labeling requirements to help reduce injuries from the products. For example, the new labels were required to have pictures to illustrate some of the instructions. [12 Worst Hormone-Disrupting Chemicals & Their Health Effects]

To see whether these new labels worked, CDC researchers examined bug bomb-related injuries from 2007 to 2015. They looked at the number of injuries in 10 states, and analyzed the rate of injuries in the period before the label change (2007 to 2012); immediately after the new labels were required (2013); and several years after the label-change requirement (2014 to 2015). (The researchers noted that in 2013, most of the total release foggers sold in stores likely still had the old labels.)

They found that, overall, there were 3,222 injuries related to total release foggers from 2007 to 2015. And the rate of injuries was about the same before and after the new labels took effect — around 26 to 29 injuries per 10 million people, the report said.

The most commonly reported symptoms were cough; upper respiratory pain or irritation; difficulty breathing; vomiting; and nausea and abdominal pain or cramping. Most cases were fairly mild and didn't require medical treatment; but about 20 cases (0.7 percent) were life-threatening and required hospitalization, the report said. Four people (0.1 percent) died from injuries related to bug bombs.

Most injuries happened when users didn't leave their house or apartment after they released the fogger, or they returned home too soon. To safely use these products, people need to leave their home and stay out for the time specified on the label, usually 2 to 4 hours, according to the EPA.

Medical write-ups of these cases suggested that many users didn't read the label before using the product — although most users left the room that was being treated, they didn't leave the premises as the label instructed, the CDC report said.

To reduce injuries from these products, "better communication about the hazards and proper uses of [total release foggers]" is needed, the report said.

In addition, some users were injured when they were sprayed in the face at close range because the nozzle on the product malfunctioned, which suggests "a need for better nozzle designs" to prevent sudden and unexpected activation of the products, the report said.

The report was published online today (Feb. 1) in the CDC journal Morbidity and Mortality Weekly Report.