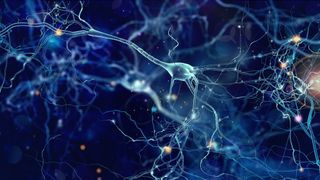 Being creative is all about making connections — in your brain, that is.

In a new study, scientists found that the brains of highly creative people have more connections among three specific regions compared to the brains of less creative thinkers. Plus, the more-creative brains were better able to fire up these regions in coordinated way compared with other brains.

The three brain regions are ones that scientists understand well, said lead study author Roger Beaty, a postdoctoral fellow studying cognitive neuroscience at Harvard University. They include the default network, which is involved in spontaneous thinking and imagination; the salience network, which picks up on important information from the environment; and the executive control network, which is involved in cognitive control functions and evaluation. [10 Things You Didn't Know About the Brain]

And though the default network seems like it should be the key source of creativity, people need the salience and the executive control networks to act as a sort of inner critic that judges whether ideas are any good or useful for the given task, Beaty told Live Science.

"You have these three different systems that are all located in different parts of the brain, but they are all co-activated at once," Beaty said. "People who are better able to co-activate them [came] up with more-creative responses."

To measure creativity and brain connections, the researchers scanned the brains of about 160 participants using functional magnetic resonance imaging (fMRI), a tool that monitors brain activity by measuring changes in blood flow in various areas the brain. With their heads inside the scanner, the participants were asked to perform a creative-thinking task called divergent thinking. This involves coming up with creative ways to use common objects, such as a knife, a cup or a brick.

"Just thinking about new and unusual ways to use these [objects] has been shown to be a valid way of [measuring] creative thinking," Beaty said.

The researchers found that performing the divergent-thinking task simultaneously activated the three different networks in the brain. And the greater the interconnectedness and synchronization of these three networks, the better the performance in the divergent-thinking task. In other words, the more connected and in-sync the brain is, the better it does on a creative task.

After establishing what distinguishes creative people's brains from those of their less creative peers, the researchers wanted to see whether they could reverse the process and use brain activity as a predictor of creative performance.

“We had data sets of previously published studies were people were doing similar creative thinking tasks, and we wanted to see whether someone with weak connectivity in [these networks] has less-creative ideas than someone with stronger connectivity,” Beaty said. "And that's what we found across three data sets."

The researchers are now planning to look for similar patterns of brain activity in specific areas of creativity such as writing or music, Beaty said. In addition, the scientists want to find out if the brain activity can in fact change as people become more proficient at certain skills, he said.

The study was published today (Jan. 15) in the journal Proceedings of the National Academy of Sciences.