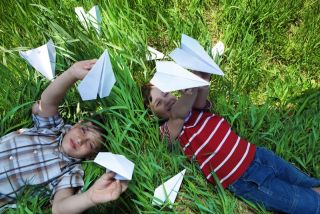 Despite the fact that today's kids have less time to play than previous generations, children's creative play has increased, recent research finds.

The study seems to oppose earlier findings that children's creativity has dropped since the 1990s. However, it's possible that increased creativity in play isn't translating to creativity in other activities, Case Western University psychologists Sandra Russ and Jessica Dillon reported in November 2011 in Creativity Research Journal.

Russ and Dillon compared the play of 894 kids tested in 14 separate studies between 1985 and 2008. In each study, the children were given the same measure of creativity. Researchers would hand the child two puppets and three blocks and tell them to play as they wished for five minutes, encouraging the kids to act out the puppets' voices out loud. These sessions were videotaped, and researchers then measured the complexity of the play sessions "plot," the positive and negative emotions in the child's playtime storyline, as well as the child's comfort, enjoyment and involvement with the play. [Top 5 Benefits of Play]

Most important for the current research, the scientists gauged each child's creativity based on how many new ideas, characters and events they acted out in the five minutes, as well as the fantasy elements and uses for the blocks the kids invented.

Russ and Dillon compared the results of these experiments over time, expecting to find that creativity had decreased. After all, a widely cited 2010 study by College of William & Mary researcher Kyung Hee Kim found that children's scores on tests of divergent thinking, an aspect of creativity, had declined over two decades.

But that's not what Russ and Dillon found. Instead, children's playtime creativity scores ticked upward a moderate amount between 1985 and 2008. They also showed more comfort in the play experiments.

These findings were despite the fact that kids get less practice at play these days than in the past. In 1989, for example, surveys by the National Association of Elementary School Principals found that 96 percent of schools had at least one recess period. By 1999, only 70 percent of schools could say the same. Of schools that do have recess, more than half allocate 30 minutes or less a day, according to a 2010 Gallup poll.

There was one cautionary note in the data: After researchers removed one unusually negative group of children from one school from the dataset, they found that negative emotions expressed during pretend play decreased over time. That finding needs a closer look, according to the researchers.

"Past studies have linked negative emotions in play with creativity," Russ said in a statement.

The research encompassed only 14 studies, and it's possible that other measurements might pick up on aspects of play that are in decline, Russ and Dillon wrote. It's also possible, given declining scores on creativity tests, that children aren't translating their creative play skills to other areas of their lives. However, the researchers see the hopeful play results as evidence of children's resilience, despite increasingly limited playtime.

"Children are resilient and may be finding ways to develop imagination and make-believe abilities other than through play," the researchers wrote. Nevertheless, they added, free play is important for social and emotional development, and parents and schools should carve out time to let kids be kids.