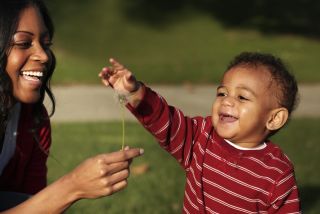 Only about half of preschoolers get daily outdoor time supervised by Mom or Dad, a new study finds.
(Image: © Junial Enterprises, Shutterstock)

Almost half of preschool children aren't taken outside to play by their parents on a daily basis, a new study finds.

In fact, 49 percent of children don't go outside with mom or dad for a walk or playtime each day, according to the research. The study was based on a nationally representative sample of 8,950 preschool children.

"For children who do not have a regular child-care arrangement besides their parents (and therefore, likely do not have other structured venues or care providers to take them outside on a regular basis), 42 percent did not go outside daily," the authors wrote today (April 2) in the journal Archives of Pediatrics & Adolescent Medicine.

What did matter was how often parents exercised, how many playmates a child had, and the child's gender. Boys were more likely to go outside frequently compared with girls, as were children with more playmates and more active parents. [The Top 5 Benefits of Play]

This lack of playtime is troubling, the authors wrote, because physical activity outside can promote motor development and good mental health. Sunlight can boost vitamin D levels, which help form strong bones. Outdoor play is even associated with less risk of nearsightedness, according to a 2011 study, perhaps because children spend more time focusing on distant objects and seeing by natural light outside.

Despite the known benefits of play, free time has shrunk over the last several decades. For example, in 1989, a survey by the National Association of Elementary School Principals found that 96 percent of elementary schools had at least one recess during the day. By 1999, only 70 percent of kindergarten classrooms had recess.

The American Academy of Pediatrics recommends that parents and physicians encourage ample free playtime and discourage screen time. Children under age 2 should avoid television as much as possible, according to AAP recommendations.