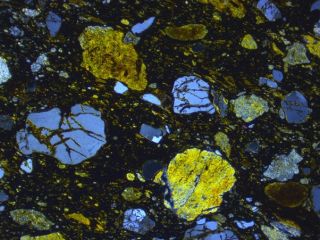 A thin slice of ejecta deposited on the Isle of Skye, Scotland, 60 million years ago.
(Image: © Simon Drake)

A remote island in Scotland bears traces of out-of-this-world minerals from a 60-million-year-old meteorite impact.

A team of geologists from Birkbeck, University of London was examining volcanic rocks on the remote Isle of Skye in Scotland when they uncovered rare minerals that have never before been found on Earth, according to a study that was published Dec. 12 in the journal GeoScienceWorld.

In the study, the team focused on a 3.3-foot-thick (1-meter) layer at the base of a 60-million-year-old lava flow deposit. Using an electron microprobe, which shoots electrons at samples and analyzes the X-rays the samples emit in response, the researchers found that rocks from the area contained rare minerals from space. [Crash! 10 Biggest Impact Craters on Earth]

The mysterious mineral, vanadium-rich and niobium-rich osbornite, was previously only found in dust samples from space on the comet 81P/Wild 2, collected by NASA's Stardust Comet Sample Return Mission.

"When we discovered what it was we were very surprised, and it was a bit of a shock because we were not expecting that," study co-author Andy Beard, a lecturer in the Department of Earth and Planetary Sciences at Birkbeck, University of London, said in the statement.

The osbornite was discovered unmelted, suggesting that it was likely an original piece of the meteorite. Other minerals associated with impacts were also found at the site, the researchers said.

In fact, the same strange mineralogy was also found at a second site located 4.3 miles (7 kilometers) away. This site was a 6.6-foot (2 m) thick layer of material ejected from a crater, according to the statement.

This discovery raises questions about the region — also known as the British Paleogene Igneous Province (BPIP) — and where the ancient meteorite hit. It's also possible that the meteorite impact triggered the outpouring of volcanic lava believed to have started at the same time, the researchers said.

The area in which the researchers discovered the unusual minerals is very steep, rough and boggy, which may have deterred previous researchers from sampling the site.

"We were sinking in up to our thighs. I distinctly recall saying to Andy Beard, 'this had better be worth it,'" lead author Simon Drake, an associate lecturer in geology at the same institution, said in the statement. "It was worth it."