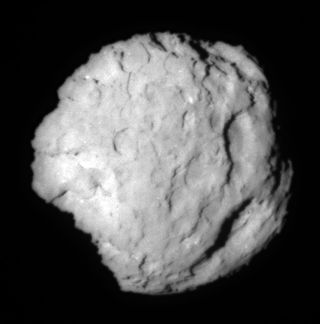 The Stardust spacecraft flew by Comet Wild 2 on Jan. 2, 2004. This image is the closest short exposure of the comet.
(Image: © NASA/JPL)

The poisonous chemical formaldehyde may have helped create the organic compounds present in the universe that gave rise to life, new research suggests.

Formaldehyde, which is composed of carbon, hydrogen and oxygen, is a common molecule found throughout the solar system. It's also famous on Earth for its use in embalming and preserving biological specimens.

Organic molecules, which contain carbon, are found in solid form in both comets and asteroids. Scientists have long wondered how these materials, which are the building blocks for all life on Earth, were created. Now researchers say they were likely made from formaldehyde in the primitive solar system. [7 Theories on the Origin of Life]

"We may owe our existence on this planet to interstellar formaldehyde," said researcher George Cody of the Geophysical Laboratory at the Carnegie Institution for Science in Washington, D.C., in a statement. "And what's ironic about it is that formaldehyde is poisonous to life on Earth."

Cody and his collaborators, Conel Alexander and Larry Nittler of Carnegie's Department of Terrestrial Magnetism, studied carbon-containing meteorites called carbonaceous chondrites for clues about where their organic compounds originated.

To test the idea that formaldehyde played a role, the scientists came up with a chemical reaction process that could create these compounds using formaldehyde as an initial ingredient. They then let that reaction run in the lab, and analyzed the results.

The lab-created organic compounds bore striking similarities to those found in the carbonaceous chondrite meteorites, as well as to the organics in other primitive solar system material, such as samples collected from the comet 81P/Wild 2 from NASA's Stardust mission, as well as in interplanetary dust particles that likely originated from comets and asteroids.

Since this chemical reaction could have occurred naturally, based on what scientists know of the early solar system, it seems like a good bet that it produced many of the initial organic compounds in our nearby cosmos, the researchers said.

The research is reported online April 4 in the journal Proceedings of the National Academy of Sciences.