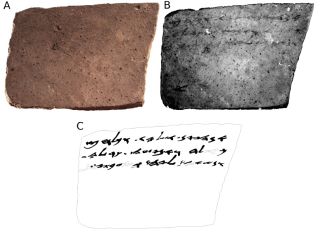 The newly discovered ink note on the backside of the shard
(Image: © Faigenbaum-Golovin, S. et al./PLOS ONE)

2017 was a big year for those who love biblical history.

Discoveries from ancient saints, new finds from the Holy Land and relics of Jesus himself revealed new insights into the people who lived and died during biblical times. This year, scholars and archaeologists made several discoveries that are shining new light on these enigmatic biblical figures.

From a forbidden teaching of Jesus' to Santa's pubic bone, here are some of the biggest stories in biblical archaeology from 2017.

A tomb that is thought to have once held the body of Jesus is 1,700 years old, recent dating has found. The Church of the Holy Sepulchre in Jerusalem covers a shrine that, the faithful believe, covers the tomb where Jesus was put to rest after his crucifixion. Legend has it that Helena, mother of Emperor Constantine, discovered the tomb in A.D. 345. For the next few centuries, the Romans protected the tomb by building a shrine and subsequent church over it. Whether Jesus was ever placed in the tomb is still unknown, but when the tomb was opened for the first time in centuries this year, researchers used a light-based technique to show that the quartz embedded in the limestone tomb hidden beneath the church was last exposed to light around A.D. 345. That backed up the notion that the shrine was built around the time of Constantine's reign. [Religious Mysteries: 8 Alleged Relics of Jesus]

An ancient painting of Jesus was uncovered in the Roman Catacombs, and scientists found the dramatic picture — depicting Jesus welcoming the dead — is at least 1,600 years old. The painting was found among other elaborate frescoes uncovered in the catacombs of St. Domitila, a set of labyrinthine tunnels that wend their way under modern-day Rome. The frescoes were found after a laser cleaning, in a burial chamber of a wealthy grain merchant. The chamber itself was known for 400 years, but the paintings were hidden beneath years of dirt and grime. [In Photos: A Journey Through Early Christian Rome]

A garbage heap full of donkey sales' receipts and old tax statements yielded a surprising treasure: the oldest known copy of an apocryphal teaching of Jesus, known as the the First Apocalypse of James. This ancient text, which is written from the perspective of Jesus' brother James, was uncovered in the late 1800s in Oxyrhynchus, Egypt, in a trove of papyri documents, and recently reanalyzed. The gospel describes demonic figures known as archons, which try to keep James shackled to the corrupt material world. The First Apocalypse of James has an unorthodox gnostic perspective and was deemed heretical by church fathers, meaning it was never part of the official Bible. That makes the Oxyrhynchus find all the more surprising, as the text contains little dots interspersed throughout that suggest it was used as a teaching tool, researchers said. [9 Biblical Theories, Conjectures and Heresies]

The Canaanites, the neighbors and perennial enemies of the historical Israelites are likely the ancestors of modern-day Lebanese people, a new genetic study published this year revealed. That conclusion came from analyzing the bones of five skeletons found in the ancient Canaanite city of Sidon, in what is now Lebanon. Researchers compared the genetic material from the ancient inhabitants of Sidon with the DNA of 99 modern-day Lebanese people living in the area. They found broad overlap between the two groups. In fact, the researchers said, ancient Canaanites likely shared the hair and skin coloring of modern-day people from Lebanon.

In the New Testament, when Jesus turned water into wine at the Wedding at Cana, he uses six goblets made of stone, according to John 2:6. Those stoneware goblets would have looked a lot like the finds unearthed at a huge, biblical-era stoneware "factory" that was discovered in Galilee in August 2017. The stone quarry and workshop would have been used to craft vessels made of chalkstone, which, according to Jewish ritual purity laws, can be cleaned after touching "unclean" objects, unlike more porous, clay-based vessels, according to the Israel Antiquities Authority. The finds shed light on how Jews at the time observed the laws laid out in the Jewish Bible, experts said. [Biblical Battles: 12 Ancient Wars Lifted from the Bible]

Archaeologists in Israel also unearthed a mining camp that operated during the reigns of King David and King Solomon, around the 10th century B.C. The copper mining camp harbored a gatehouse at the top of a hill, and included donkey stables, researchers from Tel Aviv University reported in January. The finds are part of a massive, intricate copper mining network that could have served as the real "King Solomon's mines," archaeologists said in a paper published in January in the Journal of Archaeological Science. [The Holy Land: 7 Amazing Archaeological Finds]

While tastes have changed over the millennia, the love for a good, stiff drink is apparently eternal. A shard of pottery that was first found in Israel in 1965 at the biblical-era fortress of Arad recently revealed new insights. The inscriptions on the front of the shard of pottery, or ostracon, were first deciphered decades ago and include an invocation of God and descriptions of the exchange of money. Imagine researchers surprise, then, when they flipped over the ostracon earlier this year and found a very different message, the gist of which was: Send more wine, please! Apparently, ancient Israelites were as fond of ethanol as modern-day people.

Scientists recently uncovered a new holy relic: a pubic bone from the fourth century that may once have belonged to jolly old St. Nick. Though Santa and his Arctic workshop of tireless elves and trusty reindeer sidekicks may be fiction, Saint Nicholas really did live — and died in Myra, in what is now Turkey, in A.D. 343. New radiocarbon dating found that the pubic bone fragment is about 700 years old, meaning it could really have come from the historical Santa Claus. However, the pubic bones' provenance is up for debate. St. Nicholas' bones were interred as relics in Myra for centuries, until thieves stole them and eventually brought them to two Italian churches. However, the pubic bone didn't come from those churches. Instead, the bones are tied to an anonymous collector who has sold more than 1,000 supposed relics in places such as eBay, including numerous nails and fragments of a crown of thorns claimed to be from the crucifixion of Jesus, Live Science reported.

Biblical artifacts showcased in the Museum of the Bible in Washington, D.C., which opened Nov. 17, could be forgeries, scholars said. The fragments are labeled as Dead Sea Scroll fragments and are part of a cache of "newly discovered" scrolls that have flooded the market since 2002. The original Dead Sea Scrolls collection of thousands of ancient papyri written by ancient Jews before and after Jesus' death, were first discovered in a cave in Qumran in the 1940s and 1950s. The scrolls on display at the Museum of the Bible, which is bankrolled by the Hobby Lobby company, have certain hallmarks of forgery, experts said, including not containing any new lines of text and having irregularities in the spacing and shaping of the letters, biblical scholars told Live Science.  [In Photos: New Dead Sea Scrolls Revealed]

The controversy around the Dead Sea Scrolls fragments isn't the only one to engulf the Museum of the Bible. In June, the Hobby Lobby company was slapped with a complaint from the U.S. Attorney's Office for the Eastern District of New York, for purchasing stolen cuneiform tablets that were smuggled out of war-torn Iraq. The company's founder, David Green, has been snapping up biblical artifacts at a dizzying pace in recent years to fill his biblical museum. But that hasty pace of acquisition may have led Hobby Lobby not to properly investigate the origin of every artifact it acquired, biblical scholars told Live Science. Hundreds of thousands of precious artifacts have been looted from Iraq since the start of the Iraq War, and small, portable artifacts such as cuneiform tablets are especially prone to looting, since they are so easy to carry, an expert told Hobby Lobby in 2010.