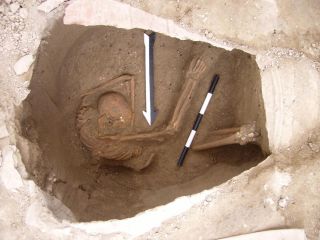 A burial jar containing the remains of an ancient inhabitant of the Canaanite city of Sidon. This individual was one of five whose DNA was sequenced to reveal the ancestry of the Canaanites.
(Image: © Dr. Claude Doumet-Serhal/The Sidon Excavation)

The people of modern-day Lebanon can trace their genetic ancestry back to the Canaanites, new research finds.

The Canaanites were residents of the Levant (modern-day Syria, Jordan, Lebanon, Israel and Palestine) during the Bronze Age, starting about 4,000 years ago. They're best known from the Old Testament of the Bible, in which they're described as the cursed descendants of Canaan, blighted by God because Canaan's father dishonored his own father, the patriarch Noah. The Canaanites were often in conflict with the Israelite tribes that wrote the Hebrew Bible. In fact, the Book of Deuteronomy features Yahweh (God) ordering the Canaanites to be exterminated.

In part because the Canaanites kept their records on easily degradable papyrus rather than clay, little is known about their side of the story. But now, ancient DNA reveals that the Canaanites were the descendants of Stone Age settlers and the ancestors of the Lebanese. [Biblical Battles: 12 Ancient Wars Lifted from the Bible]

"Canaanite ancestry was widespread in the region," study researchers Marc Haber and Chris Tyler-Smith of the Wellcome Trust Sanger Institute in the United Kingdom wrote in an email to Live Science, "and several groups who were probably culturally different shared the same ancestral background."

Haber, Tyler-Smith and their colleagues extracted ancient DNA from the bones of five Canaanites who died in the ancient city of Sidon (an area now in Lebanon). The skeletons dated from between 3,750 and 3,650 years ago. The researchers then compared the genetic sequences of these ancient Canaanites with those of 99 modern Lebanese people, as well as with ancient DNA sequences of more than 300 other people from an ancient DNA database.

The findings revealed broad overlap between Canaanite genetics and the sequences of modern-day people from Lebanon. Researchers even found some ancient gene variations that suggested the Canaanites probably had similar coloration in skin, eyes and hair as Lebanese people do today. It was surprising, Haber and Tyler-Smith said, to find such continuity in the Canaanite line, given all of the conquests and expansions into the Middle East from outside groups since the Bronze Age.

The Canaanites themselves descended from Stone Age settlers who mixed with newcomers from what is now Iran about 4,000 to 5,000 years ago, the researchers said. This mixture could be explained by the expansion of the Akkadian Empire, a Mesopotamian empire that peaked around that time, the researchers wrote.

After the Bronze Age, the Canaanites did mix a little bit with their neighbors. Modern-day Lebanese populations are largely Canaanite, the DNA showed, with a bit of Eastern hunter-gatherer and Eurasian Steppe influence that got added to the mix some 3,000 years ago, the researchers said.

Understanding the Canaanite's genetic history is important, Haber and Tyler-Smith said, because so few written records of the group's story remain.

"Genetics has the power to fill these gaps," the two told Live Science. The Near East is a key place for these sorts of studies, the researchers said, because it was such a central location in human history.

The next steps are to study "more samples, different places and different time periods," Haber and Tyler-Smith said.

The researchers reported their findings online today (July 27) in The American Journal of Human Genetics.