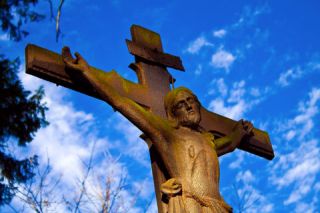 Jesus on the cross.
(Image: © Dreamstime)

Jesus Christ, founder of a faith that has endured for 2,000 years with a following of over one billion people, was a fiction, invented by Roman aristocrats to pacify the poor.

The astounding claim that Jesus was merely a propaganda tool has been made by American author and Biblical scholar Joseph Atwill, who plans to reveal proof of his hypothesis in a press conference on October 19. As Discovery News' Benjamin Radford notes: "Atwill believes that the story of Jesus was actually copied and created from the biography of the Roman emperor."

This isn't the first time that traditional Biblical scholarship has been challenged.

PHOTOS: People Claiming to be Jesus

Tracing back to the 18th century, the earliest theories challenging the historical veracity of Jesus suggesting that he was in fact a combination of other mythological — and often pagan -- traditions that share similar characteristics, such as virgin birth, sacrifice in death and resurrection.

Biblical and historical scholars, however, almost universally agree that Jesus was a living, breathing human being during the first century.

Mary Magdalene, a former prostitute who Jesus saved from death by stoning, was one of Jesus' most committed followers. But was she also his wife?

Fans of Dan Brown's "The Da Vinci Code" may be familiar with this theory, which very nearly got a small boost last year thanks to the alleged discovery of a 1,600-year-old papyrus fragment. Karen L. King, a historian at Harvard Divinity school, identified and translated the scroll, which reads: "Jesus said to them, 'My wife... she will be able to be my disciple."

Although King herself cautioned the scroll did not necessarily mean Jesus had married, further research determined that the papyrus fragment, originally discovered in an antiques market, is a "clumsy forgery," according to Vatican experts.

Jesus' Wife and Other Bible Rewrites

Parting of the Red Sea

The story of Jesus' water walk wasn't the first time that Nof put a Biblical miracle under a scientific lens.

In 1992, Nof came up with a theory for how Moses parted the Red Sea. He puts forward two possible explanations: strong winds along the Gulf of Suez pushing back the water, or a tsunami. According to his paper published in the Bulletin of the American Meteorological Society, the wind explanation is the most likely of the two.

Carl Drews, a software engineer with the National Center for Atmospheric Research, created a computer simulation in 2010 that drew upon language from the Bible to recreate the parting of the Red Sea. Drews echoed Nof's findings, suggesting that a strong wind may very well explain the temporarily receding shoreline, according to NPR.

Biblical scholars, however, contend that the crossing of the Israelites out of Egypt didn't take place on the Red Sea at all, but rather a Sea of Reeds, the location of which is disputed.

After the image of the baby Jesus and Jesus on the cross, arguably the next most iconic image of Jesus is that of him walking on water.

While Christians take Jesus' water walk as a miracle, in 2006 Florida State University Professor of Oceanography Doron Nof came up with a much simpler explanation: Jesus walked on an isolated patch of ice.

As noted in the press release about the research, the study points to "a rare combination of optimal water and atmospheric conditions for development of a unique, localized freezing phenomenon" called "springs ice."

The fragment wasn't the only evidence of a possible union between Jesus and Mary Magdalene. A 2,000-year-old tomb discovered in Talpiot, Jerusalem, allegedly could have held the remains of Jesus and his family.

Based on this find, which was chronicled in the 2007 Discovery Channel documentary, "The Lost Tomb of Jesus," Jesus and Mary were not only married, but they had a son named Judah.

This theory is based on the inscriptions written on 10 limestone ossuaries (bone boxes), several of which contain names found in the New Testament: "Jesus son of Joseph," "Maria," "Mariamene e Mara," "Matthew," "Yose" and "Judah son of Jesus."

The tomb has stirred controversy among both scholars, who meet the claim with skepticism given the historic belief that Jesus never had a family, and the faithful, who reject the find given that it discredits the resurrection of Jesus.

Samson, the famed Israelite of the Bible whose hair was the secret to his strength and the source of his downfall, was also likely a sociopath, according to University of California, San Diego researcher Eric Altschuler in 2001.

Credited with feats of strength including slaying a lion and moving the gates of Gaza, Samson also exhibited almost all of the symptoms of Antisocial Personality Disorder. Altschuler points to the following tales of Samson's questionable behavior as evidence for his diagnosis: "his failure to conform to social norms by torching the Philistines fields and then refusing arrest; ... his impulsivity as evidenced by his burning of the Philistine fields; his repeated involvement in physical fights, bullying, and cruelty to animals; ... and his lack of remorse, as evidenced by his gloating after the killing of 1,000 men."

In Altschuler's telling, Samson isn't so much a hero as he is a menace who was eventually brought under control by his fellow Israelites.

God had a wife named Asherah who was almost completely edited out of Biblical history, according to British theologian Francesca Stavrakopoulou.

Asherah was revered by ancient Israelites as a powerful fertility goddess, according to the Stavrakopoulou's analysis. She was pushed out by strict monotheists who wanted worship focused on a single, male god.

God's Wife Edited Out of the Bible -- Almost

Discovered over a period of 10 years between 1946 and 1956, the Dead Sea Scrolls are the oldest Biblical texts still around today, and have provided scholars with an invaluable window into Christian and Jewish religious history.

Despite the extensive study on these documents since their discovery, conspiracy theorists believe that Catholic scholars who conducted the first analysis on the scrolls intentionally falsified their meaning because they challenged the faith, as recounted by The Economist.

The Fig That Caused the Fall

Adam and Eve were kicked out of paradise after eating the fruit from the tree of knowledge, the one restriction God placed on them in Eden.

While the apple has long held its place in religious depictions and popular imagination as the fruit that led humankind down the path of eternal suffering and toil as mortals, the fig might actually be the fruit that tempted Adam and Eve.

The fig is the first fruit tree mentioned in the Bible. And when Adam and Eve realize they're naked, they attempt to hide their shame with fig leafs.

No fruit was specifically mentioned in the Bible, so this is a claim religious and historical scholars are not likely to challenge.