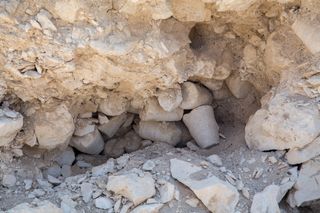 A chalkstone quarry and workshop that was used to make food and storage vessels that were considered "pure" during the time of Jesus has been unearthed in Galilee, Israel.

The chalkstone quarry is one of only a handful discovered from ancient Israel and the first ever discovered in Galilee, which was a Roman backwater about 2,000 years ago, when the site was used.

"Until today, only two other similar sites have been excavated, however both of these were in the area of Jerusalem. Our excavations are highlighting the pivotal role of ritual purity observance not only in Jerusalem but in far-off Galilee as well," Yonatan Adler, senior lecturer at Ariel University and director of the excavations on behalf of the Israel Antiquities Authority, said in a statement. [See Images of Christian Images and Artifacts]

While most people at the time used pots and storage jars made of clay, Jewish people observing the laws of ritual purity, or kashrut, may also have used stone. Jewish law dictated that any contact with something that is "ritually impure" required an object to be purified. (Things that could make something ritually impure included contact with certain types of animal corpses, genital discharges and skin diseases. Using the wrong dishes for foods that should not be mixed, such as meat and milk, can also render certain food dishes un-kosher, or impure, as well.)

In Roman times, pottery, because it is porous, was thought to be easily contaminated; objects that touched something impure had to be destroyed. Stone, meanwhile, was thought to be impervious to impurity and therefore did not require any kind of purification.

The quarry and vessel workshop was located inside a man-made cave, where researchers unearthed chalkstone cores that are used to make vessels on a lathe, chisel marks on the walls and other types of production waste for making stoneware.

"The production waste indicates that this workshop produced mainly handled mugs and bowls of various sizes. The finished products were marketed throughout the region here in Galilee, and our finds provide striking evidence that Jews here were scrupulous regarding the purity laws," Adler said.

The finds also show that ritual purity laws were significant to Jewish people not just in the spiritual heart of the Holy Land, Jerusalem, but also in relatively out-of-the-way locales like Galilee.

"The fact that Jews at this time used stone vessels for religious reasons is well attested [to] in the Talmudic sources and in the New Testament as well," Yardenna Alexandre, an archaeologist at the Israel Antiquities Authority who specializes in the study of Roman Era Galilee, said in a statement.

In fact, one of the most iconic scenes in the New Testament, the Wedding at Cana, describes Jesus turning water into wine in six stone jars:

"Now there were six stone water jars set there for the Jewish custom of purification, containing twenty or thirty gallons each." (John 2:6).