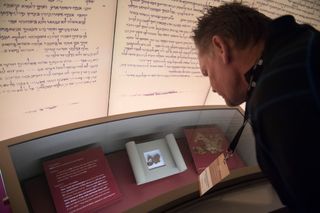 Visitors look at an exhibit about the Dead Sea scrolls at the Museum of the Bible in Washington, D.C.
(Image: © SAUL LOEB/AFP/Getty Images)

The Museum of the Bible finally opened its Genesis-inscribed doors Friday (Nov. 17) in Washington, D.C. But questions still linger over the authenticity of some of its star artifacts: fragments of the Dead Sea Scrolls.

The private museum is supporting research into the manuscripts to find out whether they are legitimate, 2,000-year-old scraps of the ancient Hebrew Bible or modern forgeries.

The original Dead Sea Scrolls, which make up the earliest surviving pieces of the Old Testament, were found between 1947 and 1956 in the Qumran caves of the Judean Desert. Many of the texts were sold to archaeologists through a local antiquities dealer, Khalil Iskander Shahin, who went by the name "Kando."(This was a time before a 1970 UNESCO convention made it illegal to dig up and sell such cultural artifacts.)

Since 2002, about 70 more fragments billed as Dead Sea Scrolls have been acquired by private collections, many of them sold by Kando's son, who was in charge of his father's estate. [In Photos: New Dead Sea Scrolls Revealed]

Thirteen of these fragments were acquired by Steve Green, president of the arts and craft chain Hobby Lobby, and the man behind the $500-million Museum of the Bible. Green has been building a collection of Bible-related antiquities, many of which he has donated to the museum, since 2009.

Some scholars who watch the antiquities market were alarmed by the fast pace of Green's early collecting —and they were not surprised when, over the past summer, Hobby Lobby was ordered to pay the U.S. government $3 million and forfeit thousands of cuneiform tablets, clay stamp seals and other artifacts suspected to be smuggled from Iraq, they told Live Science. The company, in its defense, claimed in a statement at the time it was new to the collecting world, and its representatives "did not fully appreciate the complexities of the acquisitions process," which "resulted in some regrettable mistakes."

But did those early mistakes include the purchase of forgeries, too?

"For one thing, the sudden emergence of so many 'new' Dead Sea Scrolls on the market in the past few years —of which the Museum of the Bible owns only a relatively small percentage —should be suspicious right off the bat," Bible scholars Joel Baden and Candida Moss told Live Science in an email. (Baden and Moss recently wrote "Bible Nation," a book critical of the Green family's various religious projects.) "As no archaeological excavations are uncovering new scrolls, there's no reason that there should be a surge in availability all of a sudden —unless they are being manufactured." [Gallery of Dead Sea Scrolls: A Glimpse of the Past]

Most of the new fragments have not been definitively linked to the Qumran caves. It is unknown where the texts originated before they entered the antiquities market, and "the careful study of the authenticity of the Museum of the Bible's scrolls was carried out after, not before, they went ahead with the publication of the scholarly edition of the fragments," Baden and Moss added.

"The spread of forgeries is closely connected with the lack of awareness on how important is to go in depth with researching the provenance," said papyrologist Roberta Mazza, a research fellow at the University of Manchester. Mazza used the example of the Gospel of Jesus's Wife, a piece of papyrus suggesting Jesus was married that caused a sensation when it was unveiled in 2012. "The moment someone researched [its] provenance properly, it became clear it was a forgery," Mazza said in an email.

Kipp Davis, a scholar at Trinity Western University in Canada, was involved in the museum's 2016 publication of the scroll fragments, and has continued to research the manuscripts' authenticity. Davis wrote a paper in September in the journal Dead Sea Discoveries outlining some of the problems with the scroll fragments in the Museum of the Bible and in the Schøyen Collection.

The manuscripts found at Qumran contain a diverse mix of texts, including calendars and community rules unrelated to the Bible. But the newly surfaced fragments contain texts that are already known, mostly from the Bible, Davis said.

"It's especially odd that there's virtually no fragments in any of the private collections that come from a text that we did not know before," Davis told Live Science. "One would think that out of upwards of 70 fragments circulating all over the world, you would expect at least one or at least two fragments of text of something we have not seen before."

And Davis noted that there were inconsistencies with the way letters were shaped and spaced in the fragments.

"There were lines of text that would appear to follow the damage of the fragment as opposed to what would occur naturally," Davis said. "There would be a letter that would be crammed into the corner of a fragment." He ultimately identified six of the 13 fragments that he believes are fake.

Michael Langlois, who studies ancient writing at the University of Strasbourg in France, had assessed and identified possible forgeries in the Schøyen Collection, and was less generous in his opinion of the Museum of the Bible's fragments.

"It's almost as though I could recognize the hand of the forger," Langlois told Live Science. He believes all the scroll fragments published by the museum in 2016 are modern fakes.

An investigation in progress

Museum officials, however, are not yet ready to make a judgment.

"Our labeling of these items will clearly state that there's a discussion about the authenticity," David Trobisch, the director of collections at the Museum of the Bible, told Live Science in an interview before the opening. [7 Secrets of the Dead Sea Scrolls Revealed]

Christopher Rollston, a biblical scholar at George Washington University who got a preview of the museum, told NBC News that the display of Dead Sea Scrolls indeed states they may be forgeries and that research into the matter is ongoing.

The text fragments had been sent to forgery experts in Berlin for further testing this fall, Trobisch said. The results of that analysis are still pending, but he said he expects to make an announcement by the end of the year about their findings.

Trobisch himself was not won over by the paleographic, or handwriting, arguments against the manuscripts' authenticity.

"I can show you hundreds of manuscripts where the letters change all the time by the same scribe," he said. "You have more variety."

Trobisch said the best way to answer these questions will be to deeply research the origin of the manuscripts, though he added that he didn't suspect the Kando family of being involved in a forgery scheme.

"If this is a forgery, it's probably one of my colleagues," Trobischadded, referring to the high level of knowledge it would take to create authentic-looking Dead Sea Scroll fragments.

As for why anyone would create such forgeries, money would be an obvious motive. "People have been forging Dead Sea Scrolls since before the real Dead Sea Scrolls were even discovered," said Michael Press of the Jewish Studies Program at Indiana University. Press noted the case of antiquities dealer Moses Shapira who tried selling a supposed ancient copy of Deuteronomy, which he claimed had been found near the Dead Sea. Shapira tried to sell the strips of text to the British Museum for 1 million pounds in 1883. After the scroll fragments were declared forgeries, Shapira committed suicide.

Beyond the questions over authenticity and collecting ethics, some scholars had also been worried that the Green family's evangelical Christian faith could distort the museum's portrayal of the Bible.

And Steve Green "in the past has made it very clear that he wants to use the museum as a proselytizing device to make more Christians," Robert Cargill, an assistant professor of classics at the University of Iowa, told Live Science. "When you've got a mission like that, it's not good science, it's not critical method, it's an evangelical tool."

But in recent years, Green has backed off that stance. "It is not for me to push my agenda," Green told NBC News. "It is our role to just present the facts of this book and let the visitor decide." The Associated Press, in its assessment of the museum, reported that the exhibits avoided interpreting the Bible and did not delve into issues like evolution and marriage.

Cargill had toured the exhibits in the museum while they were still under construction, not as a paid consultant, but as a critic. And he saw signs the museum staff had been listening to its detractors.

As he wrote on his blog, Cargill thought it was "remarkable" that the museum will feature a replica of the Gilgamesh Flood Tablet. This text details a Mesopotamian flood story, older than, and very similar to, the biblical flood story. The display encourages visitors to decide for themselves if they think the story of the flood in the Bible was influenced by other ancient narratives, Cargill wrote. [In Photos: Treasures of Mesopotamia]

"[The museum] may have been established as an evangelical device, but there's been a shift in direction," he told Live Science. "They're moving toward a more critical, objective presentation of the material."