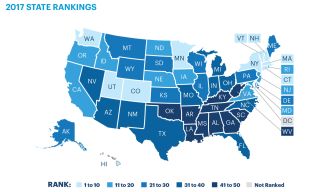 How did your state rank? Light blue states ranked the healthiest and dark blue states were the less healthy.
(Image: © United Health Foundation)

Chilly Massachusetts has bumped sunny Hawaii from the top spot as the healthiest state in the nation, a new report finds.

The five lowest-ranking states are Mississippi (50), Louisiana (49), Arkansas (48), Alabama (47) and West Virginia (46). Mississippi and Louisiana, in particular, struggle with high rates of smoking, obesity and children living under the poverty line, according to the report. [Which States Rank Best and Worst]

The annual report ranks states based on 35 different public-health measures, including death rates, percent of the population with insurance coverage, concentration of health care providers and rates of preventable hospitalizations. It also takes into account behavioral measures such as smoking and physical activity, and considers the impact of race, education, income and other demographic factors on health disparities.

Massachusetts has been climbing in the rankings since the first report was released in 1990, according to the United Health Foundation. It reached the top slot in part because it has the lowest percentage of uninsured at 2.7 percent; a high concentration of mental health providers, at 547.3 per 100,000 people in the population; and low obesity rates.

Overall, Massachusetts scored best of any state in health care policy and clinical care quality. It also ranked third in the subcategories of prevalence of health-promoting behaviors and a healthy community and environment. The state also had a relatively low rate of cardiovascular deaths (208.3 per 100,000 people) and cancer deaths (183.6 per 100,000 people). [9 Healthy Habits You Can Do in 1 Minute (Or Less)]

The rankings highlighted the vast differences in health and health care across the country.

Unfortunately, all of the rankings are superimposed upon alarming national trends, the report said.

Drug deaths are up 7 percent nationally since last year, and cardiovascular death rates are up 2 percent since 2015. Even the healthiest state, Massachusetts, has seen its rate of drug deaths rise 69 percent since 2012. Rhode Island, Ohio, New Hampshire and West Virginia have also seen large increases in drug deaths since 2012, according to the report. Florida is the only state to witness a decline in drug deaths in that period.

Rates of obesity, new cases of certain sexually transmitted diseases and violent crime have also ticked up in past years.

There is some good news, however. Smoking declined in all 50 states since 2012. The number of current smokers declined 2 percent since last year, from 17.5 percent to 17.1 percent of American adults.

In addition, air pollution continued to decline, as it has since the America's Health Rankings report started tracking it in 2003.

And the proportion of children living in poverty declined for the second year running, from 19.7 percent in 2016 to 18.0 percent in 2017. The Affordable Care Act, popularly known as Obamacare, had a noticeable effect on insurance rates, with the percentage of uninsured people declining from 16 percent in 2012 to 9 percent in 2017.