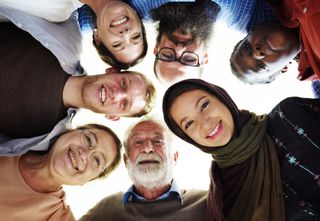 If someone asked you to describe your identity to them, where would you begin? Would it come down to your skin color or your nationality? What about the language you speak, your religion, your cultural traditions or your family's ancestry?

This bewildering question often pushes people to separate their identities into two parts: race versus ethnicity. But what do these two terms actually mean, and what's the difference between race and ethnicity in the first place?

These words are often used interchangeably, but technically, they're defined as separate things. "'Race' and 'ethnicity' have been and continue to be used as ways to describe human diversity," said Nina Jablonski, an anthropologist and palaeobiologist at The Pennsylvania State University, who is known for her research into the evolution of human skin color. "Race is understood by most people as a mixture of physical, behavioral and cultural attributes. Ethnicity recognizes differences between people mostly on the basis of language and shared culture."

Related: Why did some people become white?

In other words, race is often perceived as something that's inherent in our biology, and therefore inherited across generations. Ethnicity, on the other hand, is typically understood as something we acquire, or self-ascribe, based on factors like where we live or the culture we share with others.

But just as soon as we've outlined these definitions, we're going to dismantle the very foundations on which they're built. That's because the question of race versus ethnicity actually exposes major and persistent flaws in how we define these two traits, flaws that — especially when it comes to race — have given them an outsized social impact on human history.

The basis of "races"

The idea of "race" originated from anthropologists and philosophers in the 18th century, who used geographical location and phenotypic traits like skin color to place people into different racial groupings. That not only formed the notion that there are separate racial "types" but also fueled the idea that these differences had a biological basis.

That flawed principle laid the groundwork for the belief that some races were superior to others — creating global power imbalances that benefited white Europeans over other groups, in the form of the slave trade and colonialism. "We can't understand race and racism outside of the context of history, and more importantly economics. Because the driver of the triangular trade [which included slavery] was capitalism, and the accumulation of wealth," said Jayne O. Ifekwunigwe, a medical anthropologist at the Center on Genomics, Race, Identity, Difference (GRID) at the Social Science Research Institute (SSRI), Duke University. She is also the associate director of engagement for the Center on Truth, Racial Healing & Transformation (TRHT) at Duke. The center is part of a movement across the United States whose members lead events and discussions with the public to challenge historic and present-day racism.

The effects of this history prevail today — even in current definitions of race, where there's still an underlying assumption that traits like skin color or hair texture have biological, genetic underpinnings that are completely unique to different racial groups. Yet, the scientific basis for that premise simply isn't there.

"If you take a group of 1,000 people from the recognized 'races' of modern people, you will find a lot of variation within each group," Jablonski told Live Science. But, she explained, "the amount of genetic variation within any of these groups is greater than the average difference between any two [racial] groups." What's more, "there are no genes that are unique to any particular 'race,'" she said.

Related: What are genes?

In other words, if you compare the genomes of people from different parts of the world, there are no genetic variants that occur in all members of one racial group but not in another. This conclusion has been reached in many different studies. Europeans and Asians, for instance, share almost the same set of genetic variations. As Jablonski described earlier, the racial groupings we have invented are actually genetically more similar to each other than they are different — meaning there's no way to definitively separate people into races according to their biology.

Jablonski's own work on skin color demonstrates this. "Our research has revealed that the same or similar skin colors — both light and dark — have evolved multiple times under similar solar conditions in our history," she said. "A classification of people based on skin color would yield an interesting grouping of people based on the exposure of the ancestors to similar levels of solar radiation. In other words, it would be nonsense." What she means is that as a tool for putting people into distinct racial categories, skin color — which evolved along a spectrum — encompasses so much variation within different skin color "groupings" that it's basically useless.

It's true that we do routinely identify each other's race as "black," "white" or "Asian," based on visual cues. But crucially, those are values that humans have chosen to ascribe to each other or themselves. The problem occurs when we conflate this social habit with scientific truth — because there is nothing in individuals' genomes that could be used to separate them along such clear racial lines.

In short, variations in human appearance don't equate to genetic difference. "Races were created by naturalists and philosophers of the 18th century. They are not naturally occurring groups," Jablonski emphasized.

Where ethnicity comes in

This also exposes the major distinction between race and ethnicity: While race is ascribed to individuals on the basis of physical traits, ethnicity is more frequently chosen by the individual. And, because it encompasses everything from language, to nationality, culture and religion, it can enable people to take on several identities. Someone might choose to identify themselves as Asian American, British Somali or an Ashkenazi Jew, for instance, drawing on different aspects of their ascribed racial identity, culture, ancestry and religion.

Ethnicity has been used to oppress different groups, as occurred during the Holocaust, or within interethnic conflict of the Rwandan genocide, where ethnicity was used to justify mass killings. Yet, ethnicity can also be a boon for people who feel like they're siloed into one racial group or another, because it offers a degree of agency, Ifekwunigwe said. "That's where this ethnicity question becomes really interesting, because it does provide people with access to multiplicity," she said. (That said, those multiple identities can also be difficult for people to claim, such as in the case of multiraciality, which is often not officially recognized.)

Related: What happened during the Holocaust?

Ethnicity and race are also irrevocably intertwined — not only because someone's ascribed race can be part of their chosen ethnicity but also because of other social factors. "If you have a minority position [in society], more often than not, you're racialized before you’re allowed access to your ethnic identity," Ifekwunigwe said. "That's what happens when a lot of African immigrants come to the United States and suddenly realize that while in their home countries, they were Senegalese or Kenyan or Nigerian, they come to the U.S. — and they're black." Even with a chosen ethnicity, "race is always lurking in the background," she said.

These kinds of problems explain why there's a growing push to recognize race, like ethnicity, as a cultural and social construct — something that's a human invention, not an objective reality.

Yet in reality, it's not quite so simple.

More than a social construct

Race and ethnicity may be largely abstract concepts, but that doesn't override their very genuine, real-world influence. These constructs wield "immense power in terms of how societies work," said Ifekwunigwe. Defining people by race, especially, is ingrained in the way that societies are structured, how they function and how they understand their citizens. Consider the fact that the U.S. Census Bureau officially recognizes five distinct racial groups.

The legacy of racial categories has also shaped society in ways that have resulted in vastly different socioeconomic realities for different groups. That's reflected, for instance, in higher levels of poverty for minority groups, poorer access to education and health care, and greater exposure to crime, environmental injustices and other social ills. What's more, race is still used by some as the motivation for continued discrimination against other groups that are deemed to be "inferior."

"It's not just that we have constructed these [racial] categories; we have constructed these categories hierarchically," Ifekwunigwe said. "Understanding that race is a social construct is just the beginning. It continues to determine people's access to opportunity, privilege and also livelihood in many instances, if we look at health outcomes," she said. One tangible example of health disparity comes from the United States, where data shows that African American women are more than twice as likely to die in childbirth compared with white women.

Perceptions of race even inform the way we construct our own identities — though this isn't always a negative thing. A sense of racial identity in minority groups can foster pride, mutual support and awareness. Even politically, using race to gauge levels of inequality across a population can be informative, helping to determine which groups need more support, because of the socioeconomic situation they’re in. As the U.S. Census Bureau website explains, having data about people's self-reported race "is critical in making policy decisions, particularly for civil rights."

All this paints a complex picture, which might leave us pondering how we should view the idea of race and ethnicity: Should we celebrate them, shun them or feel indifferent? There are no easy answers. But one thing is clear: While both are portrayed as a way to understand human diversity, in reality they also wield power as agents of division that don't reflect any scientific truths.

What the science does show us is that across all the categories we humans construct for ourselves, we share more in common than we don't. The real challenge for the future will be to see that, instead of our "differences" alone.