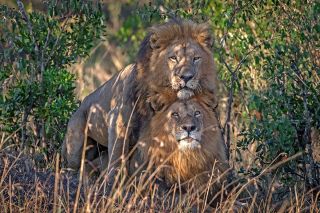 A photograph of two male lions seemingly in an amorous embrace has some humans clutching their pearls.

After the release of the photograph, taken in August at Kenya's Masai Mara National Reserve, Ezekiel Mutua, the chief executive of the Kenya Film Classification Board, blamed humans (or maybe demons) for the male-on-male mounting.

"[P]robably, they have been influenced by gays who have gone to the national parks and behaved badly," Mutua told Nairobi News, before suggesting that the lions be isolated and studied because the "demonic spirits inflicting in humans seem to have now caught up with animals."

The actual story behind the photograph shows that Mutua got some things wrong. The mounting behavior isn't actually sexual. And the official jumped the gun on attributing human motivations to animal behavior, experts said. ['Gay' Animals: 10 Alternative Lifestyles in the Wild]

"It's rare, it's not really sexual and it tells us a lot more about those officials in Kenya and their homophobia than anything else," Craig Packer, the director of the Lion Research Center at the University of Minnesota, told Live Science. "It's a bizarre overreaction."

This isn't the first time two lions have been seen in a same-sex embrace. In March 2016, another photographer snapped a male mounting and humping another male in Botswana.

The latest pictures were taken by Paul Goldstein, a British guide for Exodus Travels, who said the lions first stood side by side, and then one lay down and was mounted by the other. The lions stayed that way for over a minute, Goldstein said in a caption accompanying the photo.

"Even as he dismounted, he did not back off as is normal after mating. He crept round to the other male's muzzle, for a nuzzle, and threw a conspiratorial wink his way," Goldstein said.

This sequence is fairly similar to what was described in Botswana, where the two lions spent a long time in the mating position. But in both cases, these lions aren't mating, Packer said. When male lions mate, they zealously guard a receptive female for days at a time, having sex every half-hour or so and refusing to let any other males come near the female. A male lion ejaculates almost immediately upon inserting his penis into the female, Packer said, and accompanies his ejaculation with a particular yowl.

The male-on-male behavior in Kenya was nothing like that, and the male on top didn't ejaculate, Packer said.

Instead, the photograph captures a rare moment of social bonding between male lions. These lions spend their lives trying to reproduce. To up their odds, they work together in small groups of two, three or more males, called coalitions. These groups cooperate to drive off rival males and take over prides of females, killing any babies fathered by previous males, Packer said. Long-term studies dating back to the 1970s show that lions who manage to become part of a coalition, particularly a larger one, get more access to females and ultimately produce more surviving offspring than other individuals.

Coalition males are typically affectionate with each other, Packer said. They'll flop down on each other, lick each other and rub each other's faces. On rare occasions, they'll display the mounting behavior that Goldstein witnessed. It seems to be a way to smooth over social tensions. The same sort of behavior occurs in baboons and many other social mammals, Packer said. Female lions do it too, he added.

"It's a social interaction that has nothing to do with sexual pleasure," he said.