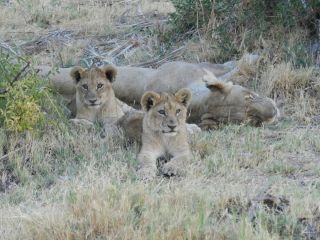 Life is tough for lion cubs, but especially males: Only about 1 in 8 male lions survive to adulthood.
(Image: © Douglas Main)

OKAVANGO DELTA, BOTSWANA — It ain't easy being king. Take a look at a pride of lions, and it becomes obvious that there are more females than males, usually at a ratio of about 2- or 3-to-1. Considering that male and female lions are born in equal numbers, the question arises: What happens to the missing males?

That's the question explored by a new film called "Game of Lions" (premiering Sunday (Dec. 1) at 10 p.m. ET on Nat Geo Wild), filmed here in the Okavango Delta, a lush wetland where the Okavango River collides with the Kalahari Desert. The area is home to a great variety of animals, such as lions, leopards, elephants, buffalo and hippopotamuses.

It's no easy feat finding lions. But under the guidance of Dereck and Beverly Joubert, filmmakers and National Geographic explorers-in-residence, it's a cinch. On the first afternoon of a three-day safari here, the couple located a group of five lions, including two cubs, as a group of four journalists drove to see them.

The first sight of wild lions is stirring, for a number of reasons. The cubs themselves are adorable, but the adults — each of which easily outweighs an offensive linemen and sports paws the size of small dinner plates — elicit a sort of tense wonder consisting of awe, respect for these powerful beasts, and something resembling fear but more like an awareness of one's mortality. They could easily kill us. But there are no words in the moment besides exclamations of disbelief.

But none of that matters to the lions, who live on this land and don't seem to pay any attention to visitors, driven about in a couple of Toyota Land Cruisers that are completely open to the air, no windows for separation.

The lion cubs seem happy and carefree, but their lives are not easy. Only about 1 in 8 male lions survive to adulthood, Dereck said.

All lions face high mortality as cubs, for a variety of reasons, including injuries, lack of food, illness and being killed by adult lions — more on that later. But when male lions begin to reach sexual maturity around age 2, the older males within the pride kick them out, Dereck said. The female lions, which are usually all related to some degree, typically stay behind.

For a young male, "the betrayal by his own blood must be confusing to him, but this is an ancient rite — the casting out of young males into a world of unknowns — a world where he will be able make it, or die," said Dereck, 57, who sports a white beard and looks every bit the wilderness gentleman. Dereck and Beverly, 56, seem to belong here in Duba, where they made other films about lions, including "The Last Lions" and "Relentless Enemies." [In Photos: A Lion's Life]

After being kicked out, the young males roam the countryside solo or in small bands, often with their brothers or cousins, negotiating the no-cat's-land between territories of other lions, said Luke Hunter, the president of the big cat conservation group Panthera, in a phone interview. If they stray into these territories, they are likely to be attacked and/or killed. A majority of male lions die during this time, said Gabriele Cozzi, a researcher at Zurich University who wasn't involved in the film.

This odyssey also puts them into contact with humans, due to expansion of rural populations, Cozzi said in an email, increasing the chances they will be killed in a wire snare trap (a non-selective, widespread method of catching African game).

If they survive long enough to find a promising new area, the next step is to take over another pride. But of course resident males will have none of that, and so they end up fighting, often to the death, Dereck said. They usually do this as a coalition, often consisting of three or four "big, bruising males," Hunter said.

When male lions take over a new territory, they almost always kill the prides' cubs, since they are not biologically related and do not want to spend energy ensuring that other lions' genes will be passed on. "They can't be stepfathers," Hunter told LiveScience. Female lions also will not be receptive to mating while they are nursing, so killing the cubs enables the male lions to procreate, said Beverly.

The Jouberts have had their fair share of close calls, and Beverly has saved Dereck's life many times (according to Dereck). They have survived several plane crashes, being charged by a wounded elephant and, most recently, Dereck was bitten by a boomslang, one of the more deadly snakes in Africa. Dereck nonchalantly points to the scar left by the bite, saying that he still lacks feeling in the area. The bite occurred days before a visit from the television program "60 Minutes" — but instead of canceling, Dereck went through with the interview. He eventually sought treatment at a South African hospital, he said.

Only physically strong, intelligent and fit males survive to become adults in charge of a pride, Dereck said. And these Okavango lions are probably the largest lions on the planet. That's because there is an  abundance of buffalo and other animals to prey upon, and the fact that the animals often walk through water in the delta's many streams, building up their muscles, he said. [Photos: The Biggest Lions on Earth]

But male lions, for all their hardships, are sought after by trophy hunters. "Every now and then, a cub emerges as a battle-scared warrior, and then gets shot for the very qualities that have allowed him to be a survivor," Dereck said.

There are only about 20,000 lions left in Africa, Beverly said. Other estimates put the number slightly higher, closer to 30,000. Regardless, their numbers are declining at an alarming rate, experts agree. About 50 years ago, there were 450,000 lions — a decline of more than 95 percent, Beverly added.

Trophy hunters, mostly Americans, kill nearly 700 lions per year, typically males, Dereck said. Perhaps an even bigger problem is the use of wire snare traps by expanding rural populations in Africa, Hunter said. These traps catch a variety of animals, which then die, attracting lions, which then fall prey to the traps themselves, he added. [7 Iconic Animals Humans Are Driving to Extinction]

The Jouberts said they hope that the film will help people appreciate how difficult it is for male lions to survive to adulthood, and in turn discourage hunting of these animals. Viewing the animals up close shows just how easy it is to approach them, and makes it clear that lion hunting wouldn't be particularly challenging.

The killing of an adult male in a pride can throw the group into chaos, Dereck said. For example, this makes the pride more vulnerable to attack from an outside group of males, leading to upheaval and the almost certain killing of any young cubs, Dereck said.

In a typical natural population of lions, about 23 to 30 percent of the animals are males, Hunter said. But hunts geared toward males can skew that balance. In Zambia's Luangwa Valley, for example, hunting recently decreased the portion of males to 8 percent of the population, at least four times lower than it would normally be, he said.

Beverly and Derek live among the iconic big cats in Botswana, often spending days out in the bush living in their specially modified Land Cruiser, which can handle deep puddles and rivers. They spent 18 months filming "Game of Lions" — which is less than one hour in length — and another five months editing.

After visiting Duba Plains, the Jouberts' dedication to saving lions and capturing them on camera becomes more impressive. Most of the time, lions lie around, acting very much like big cats. In one instance they came right up next to the safari cruiser, in search of shade, within an arm's reach. The lions made one successful kill during the trip, but it was at night in a marsh, just after a terrific thunderstorm and the beginning of the rainy season, Dereck said. In other words, the lions' true nature doesn't necessarily come out upon first glimpse, at least not to the extent that it does in the Jouberts' films. But it's more than enough to respect their massive size, power and grace. And also their vulnerability.

"We want this film to be the beginning of the conversation" about lion conservation, Dereck said. Concerning the fate of lions and other wildlife, the biggest problem is a lack of awareness and ignorance. "Once people have good information, they usually make good decisions," he said.

Editor's note: This story was generated during a reporting trip to Botswana paid for by National Geographic and not affiliated with TechMedia Network.