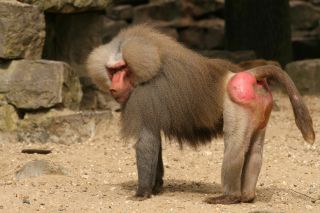 Baboons are some of the most identifiable of the monkey world. They have tufts of hair on either side of their faces and large, hairless bottoms that can turn red. These old-world monkeys also do not have prehensile tails like some other monkeys, which means they don't use their tail like a hand.

Baboons are only found in a very specific area of the world: Africa and Arabia. Four species, the chacma, olive, yellow and Guinea, live in the savannas. Others live in other semi-arid habitats, though some baboons can sometimes be found in tropical forests. The Hamadryas baboon lives in the hills along the Red Sea.

Unlike other monkeys, baboons stay on the ground much of the time. They do sleep, eat or keep watch in trees, though.

Baboons are very social creatures. Groups of baboons are called troops, and a troop can contain dozens to hundreds of members. The largest troops have up to 300 members, according to the African Wildlife Federation. Troops groom, sleep and protect each other.

Young baboons in the troop will also play together. Games include wrestling, swinging from vines and chase.

As omnivores, baboons eat a wide array of meats and plants. Typical foods in a baboon's diet include grasses, fruits, seeds, roots, bark, rodents, birds and the young of antelopes, sheep and other mammals. They even eat other monkeys. Sometimes baboons make pests of themselves by eating crops nearby their homes.

When a female baboon is ready to mate, her bottom becomes swollen and red as a sign to the males. Bottom growth has been recorded as much as 6.5 inches (16.5 cm). [Related: Big Butts Can Lie: Bootylicious Baboons May Not Be Most Fertile]

After mating, a baboon female has a gestation period of around six months. Typically, a female will only give birth to one offspring at a time, though twins have been recorded.

Baby baboons are called infants. Infants weigh about 2 lbs. (1 kg) at birth and cling to their mother by hanging onto her chest fur as she goes throughout her day. They only drink their mother's milk until they start weaning at 3 to 4 months old. Like with human infants, weaning can be a long process full of tantrums.

A little before a baboon turns 2 years old, it starts becoming a juvenile and grows one pound every three months, according to the Amboseli Baboon Research Project. They become mature at around 6 to 8 years old.

Males typically leave their troops when they become adults while the females stay. Males will often join other troops and leave again many times throughout their lives.

Baboons can live up to 30 years in the wild. Female baboons can reproduce even when they get very old, unlike human females.

Here is the taxonomy of baboons, according to Integrated Taxonomic Information System:

Also, Gelada baboons are members of the Papionini tribe, but are in a different genus. Their scientific name is Theropithecus gelada.

The baboon's primary predators are humans, cheetahs and leopards. According to the International Union for Conservation of Nature and Natural Resource's Red List of Threatened Species, no baboon species are endangered. All of them are listed as least concern, except for one.

The Guinea baboon is listed as near threatened because it is believed that they may have lost 20 to 25 percent of their home range in the past 30 years. This range loss is due greatly to human farming and hunting.

Baboons can talk, sort of. They have at least 10 different vocalizations they use to communicate.

Humans and baboons are closely related. They have a genetic similarity of 94 percent, according to the Amboseli Baboon Research Project.

Gelada baboons have three distinct types of yawns that they use to communicate.