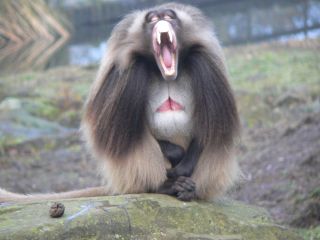 From intimidating and intense to warm and fuzzy, distinct yawns among gelada baboons send different social messages, according to a new study.

Humans and most other vertebrates experience yawns as a result of various physiological and mental states, including sleepiness or emotional arousal, such as fear or excitement. But despite their different sources, these yawns often look identical and are difficult to distinguish by onlookers.

To determine whether these different types of yawns send different social messages among geladas, researchers based at the University of Parma in Italy studied more than 5,900  yawns within two gelada colonies housed at NaturZoo in Rheine, Germany, noting the contexts in which the yawns occurred and the behaviors associated with each.

The team found the two less-intense types of yawns — yawns with covered teeth and yawns with uncovered teeth — were most common among females, and were often accompanied by lip-smacking, which is a friendly behavior, the team reported in the Feb. 6 issue of the journal Scientific Reports. Yawns are also often contagious among females, and females often mirror the intensity of other females' yawns more so than males did with other males, the team says.

"The most relaxed yawn types are generally performed by adult females and yawns by adult females are extremely frequent during social encounters," study co-author Elisabetta Palagi, a researcher at the National Research Council in Rome, told Live Science. "For example, we observed that when two different females approach, they often embrace and yawn together."

The more intense gum-bearing yawn, on the other hand, was more common with males, particularly those of high rank. These yawns were often accompanied by some sort of vocalization by the yawners, and often arose during periods of tension, such as directly before feeding. This suggests the display may be a form of intimidation, the team reports.

Since yawns are generally involuntary, the team believes that, in most cases, the messages associated with gelada yawns are likely subconscious, Palagi said. Even so, yawns could conceivably play an important role in the stability of colonies by helping to establish the dominant males, and by helping females subconsciously bond and express empathy with others in the colony, Palagi said.

The team next plans to assess the behaviors associated with yawns more closely to determine the extent to which gelada yawns express empathy. The researchers also plan to study yawns in other monkey species to try to tease out other potential types of yawn messaging, Palagi said.