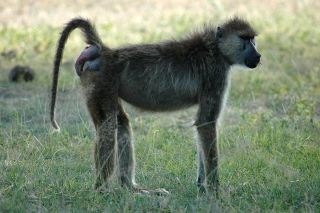 The swollen red bottom of a female baboon has long been thought to be an irresistible come-hither signal for males. But now, a new study suggests that male baboons are much more sophisticated than that.

In fact, a male baboon's (Papio cynocephalus) motivation to mate with a female is based more on the length of time since her last pregnancy than on the size of her derriere, scientists have found.

"Our study suggests that, at least in part, males follow a rule along the lines of 'later is better,' rather than 'bigger is better,'" Courtney Fitzpatrick, a postdoctoral scientist at Duke University's National Evolutionary Synthesis Center and one of the researchers on the new study, said in a statement. [In Photos: The Life of a Gelada Baboon]

The female baboon's famously red bottomis a sign of sexual readiness; when female baboons ovulate, their butts swell, making it clear to available males that they are fertile. Evolutionary psychologists have even argued that human males share some of the love of red that drives our primate cousins, suggesting that red lipstick and clothing mimics the function of a red baboon butt. (However, research suggests the line between the color red and sexual appeal may not be quite so straightforward.)

Fitzpatrick and her colleagues wanted a precise measurement of female rump swelling, to see if bigger bottoms did, in fact, correlate with more mating and infant survival. They used a zoom lens and digital calipers to measure 34 wild female baboons' swollen rumps down to the millimeter. The biggest change was a swelling of 6.5 inches (16.5 centimeters) in a female named Vow, they found. The smallest was 4 inches (10 cm) in a female dubbed Lollipop.

But this spread had less to do with infant survival or mate attraction than the researchers expected. Baboon mothers with bigger bottoms didn't have a better chance of raising babies that survived past infancy, the researchers found, once they accounted for other factors, such as age and rank in the pack. That finding suggests that bottom swelling isn't a reliable indicator of evolutionary fitness, the researchers said.

The bigger-bottomed baboons didn't attract more males, either, the researchers report in the June issue of the journal Animal Behaviour. Rather, males really seemed to go for females that had gone through more ovulatory cycles since their last pregnancy. Like humans, baboons are not as fertile while nursing infants, so it might behoove males to wait a few cycles to mate.

"It's almost as if the males are counting," Fitzpatrick said.

The next step, the researchers said, is to study whether females prefer to mate later after a pregnancy and if doing so translates to better survival for offspring.