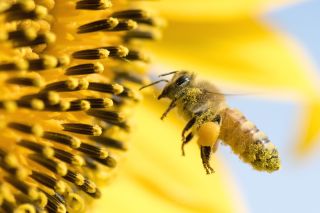 One honeybee's stinger wound up in a pretty weird location: lodged in the back of a teen girl's throat, a recent report of the case reveals.

The 13-year-old was hanging out by a pool when an insect unexpectedly flew into her mouth. The girl started coughing immediately, and over the next few hours, she started to feel pain in her throat and right ear, and had difficulty swallowing, according to the case report. [27 Oddest Medical Cases]

Concerned about these symptoms, her parents took the girl to an ear, nose and throat specialist, where doctors used a device called a laryngoscope to examine the back of her throat, voice box and vocal cords. It was during this exam that the doctors spotted the cause of the teen's problems: A honeybee stinger had pierced through a flap of cartilage at the back of the throat called the epiglottis and was embedded in the tissue. (The epiglottis blocks a person's breathing tube when he or she swallows.)

At the time of the incident, the girl only knew that an insect had flown into her mouth. It wasn't until the doctors spotted the stinger that they knew the insect was in fact a bee, said Dr. Craig Zalvan, the medical director of The Institute for Voice and Swallowing Disorders at Phelps Hospital in Sleepy Hollow, New York.

By the time the doctors found the stinger, it had been lodged in the teen's epiglottis for at least 4 hours, said Zalvan, who was one of the doctors who treated the girl and was a co-author of the case report. During that time, the bee (before losing its stinger) would have irritated the lining of this area of the throat, and the sharp needle of the stinger would have caused pain in her throat, he said.

The girl also felt pain in her ear because many of the nerves in the throat connect to the ears, Zalvan told Live Science.

Kids may accidentally inhale objects, but it's rare for these objects to get trapped in the larynx, or voice box, according to the case report, because most of these objects will either continue down into the airways leading to the lungs or be coughed out.

But in this case, the bee stinger got stuck in the epiglottis.

A stinger stuck in the throat can be particularly risky. For example, the stinger could have delivered bee venom that can cause swelling near the voice box, Zalvan said. A little swelling in this area could result in temporary changes in the voice; a lot of swelling, on the other hand, might block the airway and lead to choking and death, he said.

And for people with bee allergies, the stinger could've caused a life-threatening reaction, Zalvan said. Fortunately, the teen had no known bee allergy, he added.

The doctors successfully removed the stinger from the girl's throat, and her symptoms went away. They never found the rest of the bee, however, and suspect the insect was likely ingested, coughed up or spit out by the teen.

If a stinging insect flies into a person's mouth, Zalvan said he recommends coughing gently to remove it. If that does not work, drinking water can help wash it down, he said.

If any symptoms develop, such as a change in voice, wheezing, neck or throat pain, trouble breathing or swallowing, go to the emergency room, especially if you have a known insect allergy, Zalvan said.