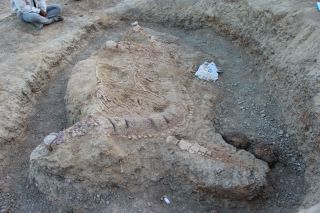 An exquisitely preserved fossil of an ichthyosaur — a dolphin-like reptile that lived during the dinosaur age — found alongside the remains of hard-shelled ammonites is one of a kind: It's the only Jurassic ichthyosaur ever found in India, according to a new study.

The nearly 18-foot-long (5.5 meters) ichthyosaur lived during the Kimmeridgian, an age within the Jurassic period lasting from about 157 million to 152 million years ago, the researchers said.

The discovery "throws light on the evolution and diversity of ichthyosaurs in the Indo-Madagascan region," study lead researcher Guntupalli Prasad, a geologist at the University of Delhi, said in a statement. [In Images: Graveyard of Ichthyosaur Fossils Found in Chile]

The scientists still have to chisel the fossilized bones out from the surrounding rock, but based on the creature's shape and size, it's likely part of the Ophthalmosauridae family, which lived between 165 million and 90 million years ago, the researchers said.

In fact, the finding could help researchers learn about Ophthalmosaurid dispersal between India and South America, the researchers said.

But there's still a lot of work to be done on the specimen, said Dean Lomax, a paleontologist and visiting scientist at the University of Manchester, in the United Kingdom.

"Once the bones have been removed from the rock, only then can a positive identification be given," Lomax, who was not involved in the study, told Live Science in an email.

The ichthyosaur was buried alongside fossils of ammonites and squid-like belemnites — creatures that were likely main staples of its diet. An analysis of its robust teeth "indicates that the teeth were used to grasp a prey with a hard exterior, such as armored fish, crustaceans and thick-shelled ammonites," the researchers wrote in the study.

The study is "fascinating" and shows, as the authors suggest, that perhaps few ichthyosaurs have been found in India because no one was looking for them there, Lomax said.

"Incredibly rare and important fossils are often found in the least expected locations," Lomax said. "This new study provides further insights into the distribution of ichthyosaurs during the Jurassic and the evolution of that group."

Ichthyosaurs went extinct about 90 million years ago, about 25 million years before the dinosaur-killing asteroid slammed into Earth.

The study was published online Oct. 25 in the journal PLOS ONE.