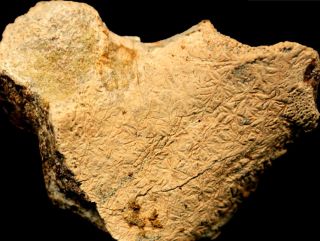 At least 145 million years ago, a hungry sea urchin might have left these star-shaped marks on this rib fragment of an ichthyosaur.
(Image: © Nature Communications, doi:10.1038/ncomms5789)

When whales die, their bodies sink to the seafloor. But surprisingly few of their natural graves have ever been found.

The rare "whale falls" that have been seen by scientists aren't exactly grim pictures of death; rather, they're often teeming with life. Sharks, eels, bacteria and bone-eating "zombie worms" gather around these nutrient-rich graveyards. The number of new species discovered around whale falls in deep water suggests the carcasses can host distinct, complex ecosystems.

At a time when dinosaurs still roamed Earth and whales and other marine mammals had yet to evolve, the corpses of marine reptiles known as ichthyosaurs may have enriched the seas, according to a new study. [Image Gallery: Ancient Monsters of the Sea]

A group of scientists reports they found traces of scavenging on the bones from a fossilized "ichthyosaur fall" of the Late Jurassic Period. This 10-foot-long (3 meters) specimen was discovered during the construction of a road in 1991 in Dorset, England. (The creature is now housed at the Bristol City Museum and Art Gallery.)

Ichthyosaurs, which lived from about 245 million to 90 million years ago, were dolphin-shaped predators that gave birth to live young. The one that turned up in Dorset belonged to the genus Ophthalmosaurus, named so for the animal's freakishly big eyes.

The researchers — led by Silvia Danise of Plymouth University in the United Kingdom — found sharp, narrow grooves on the animal's rib bones, likely left by small fish that picked flesh off the ichthyosaur soon after it died. The scientists also saw star-shaped grazing marks likely left by sea urchins that flocked to the boneyard once it was covered in bacteria. The carcass then seems to have gone through a "reef stage" for several years when the bones were encrusted by animals like oysters.

Modern whale falls typically don't go through a long reef stage, partly because bone-eating worms in the genus Osedax can devour an entire whale skeleton within a few years, Danise and colleagues wrote on Sept. 10 in the journal Nature Communications. But this ichthyosaur was likely spared. Scientists currently believe Osedax worms, which were only described in 2002, evolved in the late Cretaceous Period — millions of years after this ichthyosaur met its death.