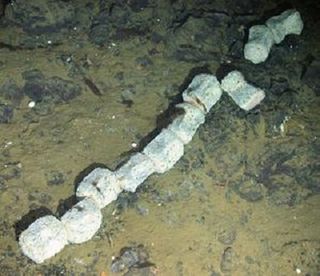 This image shows the backbone of the Minke whale found on the seafloor near Antarctica.
(Image: © Natural Environment Research Council)

For the first time ever, scientists say they have discovered a whale skeleton on the ocean floor near Antarctica. Resting nearly a mile below the surface, the boneyard is teeming with strange life, including at least nine new species of tiny of deep-sea creatures, according to a new study.

Though whales naturally sink to the ocean floor when they die, it's extremely rare for scientists to come across these final resting places, known as "whale falls." Discovering one typically requires a remote-controlled undersea vehicle and some luck.

"At the moment, the only way to find a whale fall is to navigate right over one with an underwater vehicle," study researcher Jon Copley, of the University of Southampton in England, said in a statement. The team's chance encounter with a 35-foot-long (10.7 meter) spread of bones that belonged to a southern Minke whale came as they were exploring an undersea crater near the South Sandwich Islands.

"We were just finishing a dive with the U.K.'s remotely operated vehicle, Isis, when we glimpsed a row of pale-coloured blocks in the distance, which turned out to be whale vertebrae on the seabed," Copley explained.

When whales die and sink to the ocean floor, their carcasses provide nutritional boosts and habitats for deep-sea life. Though their flesh decomposes within weeks, whale bones can last anywhere from 60 to 100 years, supporting bacteria and strange creatures like zombie worms, which are mouthless, eyeless animals that feed off the skeletons.

"The planet's largest animals are also a part of the ecology of the very deep ocean, providing a rich habitat of food and shelter for deep sea animals for many years after their death," said Diva Amon, another University of Southampton researcher. "Examining the remains of this southern Minke whale gives insight into how nutrients are recycled in the ocean, which may be a globally important process in our oceans."

The Antarctic whale fall, thought to have been on the seafloor for several decades, was surveyed using high-definition cameras, and samples were collected to be studied back on land. The team encountered several new species of sea snails and worms that were living off the bones. They found a new species of isopod crustacean, similar to woodlice, crawling over the skeleton, according to a statement from the U.K. National Oceanography Centre. The researchers also found an undescribed species of zombie worms (Osedax), which could help scientists study how the mysterious species has managed to become surprisingly diverse and widespread. (They've been found in whale falls in the eastern and western Pacific as well as the North Atlantic.)

"One of the great remaining mysteries of deep ocean biology is how these tiny invertebrates can spread between the isolated habitats these whale carcasses provide on the seafloor," Adrian Glover, a researcher at the Natural History Museum in London, said in a statement.

A recent study suggested that the sex strategy of zombie worms is the key to their success. Females of the species Osedax japonica quickly mature and then constantly produce eggs that harems of dwarf males fertilize, scientists found. What's more, zombie worm larvae can swim actively for at least 10 days before settling on bones on the ocean floor, according to the new research, detailed last month in the journal Naturwissenschaften.

The study of the whale fall was recently published online in the journal Deep-Sea Research II: Topical Studies in Oceanography.