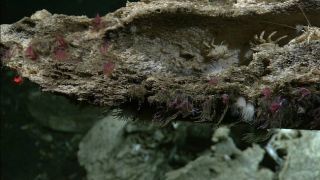 A new species of sea anemone has been found in the carcass of a whale that sunk to the ocean floor off the coast of Monterey, California, marking the first discovery of one of these filter-feeding marine animals living in a so-called whale fall.

Whale falls, the resting place of a dead whale, provide temporary but important nutrition boosts and habitats for deep-sea life. The flesh of the dead whale decomposes within weeks, but the bones can last anywhere from 60 to 100 years as bacteria break down the bones, releasing sulfur that aquatic creatures use to make energy.

The anemone, called Anthosactis pearseae, is small, white and roughly cube-shaped. It's about the size of a human molar and even looks like a tooth with small tentacles on one side.

The anemone was named after Vicki Pearse, the University of California, Santa Cruz, naturalist who found and collected the anemone during a Pacific cruise taken by the Monterey Bay Aquarium Research Institute's research vessel, Western Flyer. Ten anemone specimens, including the newly named one, that she gathered were sent for identification and closer study to biologist Meg Daly, an anemone specialist at Ohio State University.

"These creatures were so cool simply because we knew that no sea anemone had ever been found on a whale fall," Daly said in a prepared statement.

The new anemone species is distinctive for the uniform length of its tentacles, a characteristic shared by the seven species of sea anemones in the genus Anthosactis.

The anemone was collected, like all deep-sea animals, via a tedious process that involves underwater video cameras attached to remotely operated vehicles (ROVs). ROVs have robotic arms and suction devices that are used to collect ocean species.

Whale falls might seem like strange places for marine life to dine and dwell, but once carcasses fall, they are excellent food and real estate for sea creatures. "A whale dies where it dies, and its carcass lands wherever," Daly said. "But these are actually some of the most stable deep sea communities."