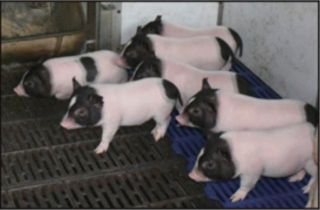 A group of scientists in China has successfully modified the genes of pigs to create a slimmer swine.

These "low-fat" pigs have about a quarter less body fat than normal pigs, according to NPR.

The petite piglets were created using the genetic cut-and-paste tool CRISPR, which can be programmed to make a cut into a genome in a targeted spot and then insert new genetic snippets into that slot.

These edited pig embryos were implanted into 13 female pigs, three of whom became pregnant and gave birth to a total of 12 piglets, according to the study. [10 Amazing Things Scientists Just with CRISPR]

In addition to having less fat than their non-modified piggy peers, the low-fat pigs were better able to regulate their body temperature in the cold.

Indeed, the ability to withstand colder temperatures was the main reason the scientists modified the pig genome. Cold temperatures can be a killer for newborn piglets, which are unable to maintain their body temperature, according to the study. Pig breeders have responded by using heat lamps to warm the infant pigs. However, the creation of piglets that can stay warm on their own could increase piglet survival, the researchers said.

But you probably won't see these low-fat pigs, and their low-fat bacon, in the United States any time soon: It's unlikely that the Food and Drug Administration would approve a genetically modified pig to sell in the U.S., and consumers would likely also be highly skeptical, study editor R. Michael Roberts, an animal sciences professor at the University of Missouri told NPR.