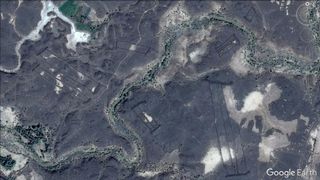 Mysterious stone structures that archaeologists call "gates," due to their loose resemblance to old-fashioned field gates, have been discovered in Saudi Arabia.
(Image: © Google Earth)

Almost 400 mysterious stone structures dating back thousands of years have been discovered in Saudi Arabia, with a few of these wall-like formations draping across old lava domes, archaeologists report.

Many of the stone walls, which archaeologists call "gates" because they resemble field gates from above, were found in clusters in a region in west-central Saudi Arabia called Harrat Khaybar.

The archaeologists involved in the research aren't sure of the purpose, or even the exact age, of these gates. [See Images of the Mysterious Stone Structures in Saudi Arabia]

Discovered mainly through satellite images, a few of the gates are actually located on the side of a volcanic dome that once spewed basaltic lava, researchers found.

The gates "are stone-built, the walls roughly made and low," David Kennedy, a professor at the University of Western Australia, wrote in a paper set to be published in the November issue of the journal Arabian Archaeology and Epigraphy. The gates "appear to be the oldest man-made structures in the landscape," Kennedy noted, adding that "no obvious explanation of their purpose can be discerned."

The smallest of the gates extends about 43 feet (13 meters), while the longest is 1,699 feet (518 m) long, or longer than an NFL football field. Many have multiple stone walls that, in some instances, form a rectangular design; some of the others, called "I" type gates, have only one stone wall with heaps of stone at each end.

"Gates are found almost exclusively in bleak, inhospitable lava fields with scant water or vegetation, places seemingly amongst the most unwelcoming to our species," Kennedy wrote. Thousands of years ago, he noted, the landscape was more hospitable to human life. Other types of stone structures — such as "kites," which were used to hunt animals, and "wheels," named for their shape — have also been discovered in these lava fields.

Most of the gates were discovered through satellite surveys, and no archaeological fieldwork has been conducted on them. However, in the 1980s, before the gates were discovered, volcanologists Vic Camp and John Roobolmapped an area of the Harrat Khaybar that included a lava dome festooned with gates and other stone structures. This lava dome is located near a taller lava dome, called Jabal Abyad,which means "white mountain" in Arabic.

The lava domes are no longer active, Camp said, adding that in the past, basaltic lava covered some of the stone structures, including the gates.

"We see several areas where the younger lavas are devoid of such [stone] structures, although surrounded by several [stone structures]," Camp told Live Science. One of the stone structures is partially covered in hardened lava, photographs show. Camp estimates that some of the gates around the lava dome were built around 7,000 years ago.

Archaeological fieldwork is necessary to determine what the gates are and when, exactly, they date to, Kennedy said.

Travis Hearn, a research assistant with the Aerial Photographic Archive for Archaeology in the Middle East, contributed to the journal article; and Kennedy also worked with members of the Desert Team, a group of Saudi Arabian citizens who were the first to map some of the stone structures and visit some of the sites.