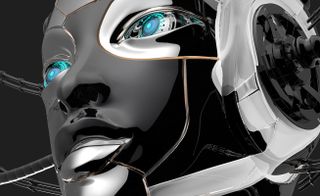 How will the future of humanity be shaped by our growing reliance on computers and machines?
(Image: © Willyam Bradberry/Shutterstock)

NEW YORK — From transporters and lightsabers to spaceships that can travel faster than the speed of light, futuristic devices that lie beyond humanity's grasp — for now, at least — are a staple of science fiction. And yet over time, people have steadily advanced the boundaries of what technology can do. For some, this raises concerns about whether we should be paying closer attention to sci-fi's cautionary tales about the hidden costs of relying too heavily on tech — particularly when it comes to robots and artificial intelligence (AI).

As machines become ever more sophisticated and specialized, and perhaps even begin to think for themselves, what does that mean for the humans who engineer and depend on them?

On Oct. 5, here at New York Comic Con (NYCC), a group of science-fiction authors took part in a panel titled "It's Technical: Our Future with Robots and More." During the discussion, they addressed rapid advances in robotics, how those advances align with sci-fi speculations about the creation of intelligent robots — helpful and malevolent — and whether some of the more pessimistic views of a technology-dominated future could ever come to pass. [Super-Intelligent Machines: 7 Robotic Futures]

In recent years, one of the most prominent figures in the tech world — Elon Musk, CEO of SpaceX and Tesla — has spoken repeatedly about the inherent dangers of AI. Musk recently raised eyebrows when he tweeted on Aug. 11 that AI posed a "vastly" bigger threat to the world than North Korea, and he urged lawmakers on July 15 at the National Governors Association summer meeting to regulate AI before "people see robots going down the street killing people."

Many of the current fears about AI center on the rise of superintelligent computers that can outthink humans, the NYCC panelists said. In reality, the dangers of nascent AI may lie in its similarities to human intelligence, author Annalee Newitz told the audience. AI that emerges from human-generated data would likely be shaped by humanity's own flaws and failings, making it "just as screwed up and neurotic as we are," Newitz said.

And even if robots can think for themselves, that doesn't necessarily mean they'll take over. In Newitz's novel "Autonomous" (Tor Books, 2017), robots that think and feel as humans do are still seen as property, and are indentured to their owners for up to 10 years, or until they pay off their manufacturing costs, she told the audience. Throughout human history, slavery has existed as an economic cornerstone, Newitz said. In a futuristic world, this would likely extend to include intelligent robots — which could further cement the institution of slavery for people as well, as it does in her book, she explained.

In "Autonomous," as the robot character Paladin becomes self-aware, she navigates what it means to be a person in a world where personhood does not necessarily come with personal freedom, Newitz said.

Truly autonomous, intelligent robots may exist solely in the realm of sci-fi, but artificial intelligence has recently made large strides toward behaviors that we consider to be uniquely human, such as making art, crafting a holiday song and even writing the next novel in the popular George R. R. Martin fantasy series "A Song of Ice and Fire," the basis for the HBO series "Game of Thrones."

And it can be difficult to predict how tech that's around today might evolve in the future, according to the NYCC panelists. Often, advanced technology is introduced and widely used without consideration of the long-term consequences, author Kirsten Miller said during the panel discussion. [History of A.I.: Artificial Intelligence (Infographic)]

The novel "Otherworld" (Delacorte Press, 2017), which Miller co-wrote with Jason Segel, explores an advanced form of virtual reality (VR) that engages all the senses, and questions the ramifications of spending months, or even years, in a virtual space. In the real world, immersive VR experiences are relatively new, but we may find that, over time, the technology could insinuate itself into daily life in ways we don't expect, Miller told the audience. For example, she asked, who would have guessed five years ago that Facebook — a social media platform — could play a pivotal role in a presidential election? And what unexpected consequences might we see in five more years, from the widespread use of VR?

"I have a feeling it's going to go into some very dark places — probably more quickly than we're ready for," Miller said.

However, though science fiction may sometimes seem prescient about certain technologies, it doesn't predict the future, Miller noted. Rather, sci-fi acts as a mirror for modern issues that are otherwise difficult to talk about; ultimately, even the most futuristic science fiction is still about the present, Newitz said. By considering what it could mean to share a world with intelligent machines — and questioning whether people could eventually accept the humanity of a thinking robot — writers can draw attention to pervasive inequalities among people in society today, panelist Sylvain Neuvel told the audience.

And as for desirable sci-fi tech that's still nowhere to be found in the real world, the panelists named an array of personal favorites, including the robo-driver in the movie "Total Recall," the personal force fields in "Dune," and antiviral treatments that attack viruses on a molecular level.

"And giant robots," Newitz added. "I just want to come back to that."