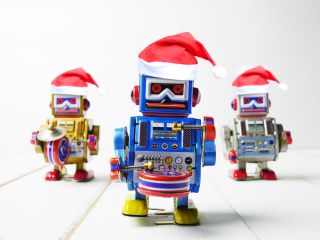 You might find yourself wishing for a silent night after you hear the first Christmas carol written by artificial intelligence.

The new tune makes its holiday season debut courtesy of a team of computer scientists in the Department of Computer Science at the University of Toronto. The researchers fed 100 hours of pop songs to a type of artificial intelligence (AI) known as a recurrent neural network, which learns and performs by building connections between input data, much like the human brain does.

In this case, the uploaded songs taught the neural network about the general structure of pop music. The researchers then tested its ability to generate a song about an image — a decorated Christmas tree surrounded by wrapped presents — using a process called "neural story singing," which they described in a study currently under review for a conference presentation. [Super-Intelligent Machines: 7 Robotic Futures]

To write the song, the researchers first had the computer produce a story about the festive image. Then, they selected a rhythm of one beat per word, linked the endings of sentences to the endings of the music's bars, and tuned it so that the vocals would occur in a "natural" pitch range, the scientists said. The neural network then took the song to completion.

Its efforts did, in fact, produce something that resembles a Christmas song — there are references to Christmas trees, presents, and "lots and lots and lots of flowers." But the vocals are disturbingly dirge-like and the lyrics include perplexing non sequiturs such as, "A hundred and a half hour ago / I'm glad to meet you."

AI songwriting recently grabbed the spotlight when a team of scientists at Sony CSL Research Lab shared a Beatles-style song called "Daddy's Car," whose melody and parts of the orchestration were created by a computer system called Flow Machines.

The authors of the new study admitted that more work needs to be done for AI-generated melodies and lyrics to more closely mimic those penned by humans. Their Christmas song may offer some listeners a welcome break from the time-honored classics, but Yule carolers probably won't be singing "I've always been there for the rest of our lives" anytime soon.