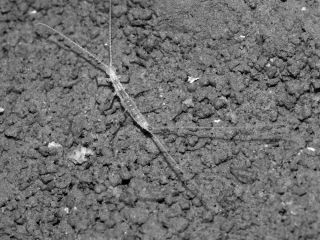 The slender insect-like creature is the first entirely subterranean animal of its kind to be found in the country of Turkmenistan.
(Image: © Alberto Sendra)

A two-tailed cave dweller seems to have a thing for cheese. Scientists lured the pale and eyeless creature from a cave in Turkmenistan using French Camembert cheese.

The animal, now called Turkmenocampa mirabilis, is new to science and is the first known underground land animal in Turkmenistan. The species name "mirabilis" means "unusual" or "remarkable" in Latin and highlights the insect-like creature's unique body shape (two tails and a pearl-like head and bottom), researchers said in a new study describing the findings. [Gallery: Out-of-This-World Images of Insects]

In May 2015, Sendra and two other researchers — Boris Sket, of the University of Ljubljana in Slovenia, and Pavel Stoev, of the National Museum of Natural History in Bulgaria — traveled to a remote cave known as Kaptarhana, located in eastern Turkmenistan. The cave, along with more than 300 others, is hidden in the Koytendag Mountains.

In an effort to find animals new to science, the researchers spent 8 hours placing pitfall traps in humid areas of the cave. They baited the pitfall traps with less-than-appetizing cheese. The traps were placed near guano heaps, which are piles of bat excrement.

"For attracting animals living in caves (where nutrition is highly limited), any smelly food would do the work," Stoev told Live Science in an email. "Speleobiologists [scientists who study cave-dwelling creatures] often use rotting fish or meat, various cheese or, in extreme cases, also their own excrements."

Their efforts paid off.

The creature they found was only 0.02 inches (0.6 millimeters) long, and because of its two long bristletails — which it uses to sense its dark world without eyes — the animal has been designated to the scientific order Diplura.

The discovery highlights the importance of Kaptarhana cave as a refuge for many local invertebrates (animals without backbones), the researchers said. As such, the scientists think the finding also indicates that the 35-mile-long (57 kilometers) cave system deserves protection under the laws of Turkmenistan.

The new species was first described online Sept. 21 in the journal Subterranean Biology.