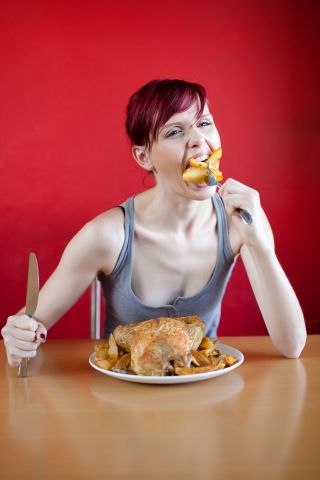 Stop exercising, eat as much as you want ... and still lose weight? It sounds impossible, but researchers have made it happen in the lab.
(Image: © Peter Bernik | Shutterstock)

Big bites lead to big bellies, researchers say, and they might have a solution: People take smaller bites of food when it's accompanied by stronger aromas, so infusing foods with strong aromas could get people to eat less.

We take bigger bites of foods we are familiar with and smaller bites of those that require more chewing. Those small bites are a good thing, as they actually make your stomach feel fuller faster, reducing the amount of food eaten and calories taken in, the researchers note.

To see how the smell of a food changes bite size, the researchers designed an interesting eating contraption to separate smell from other factors that affect how big of a bite participants take.

Participants were fed vanilla custard through a tube while "vanilla-custard" smells were delivered directly into the backs of their noses. They controlled the amount of custard fed into their mouth by pressing a button to stop the flow. The researchers weighed the custard cup before and after each "bite" to measure its size. Participants ate about the amount of a normal-size desert. [10 Tips for Sticking to Healthy Portions]

The "back of the nose" presentation mimics the aroma during real eating, said Rene de Wijk, a senior researcher at the Wageningen University and Research Centre in the Netherlands: "[these] presentations resemble the situation of normal eating whereby aromas travel from the food in the mouth," he said. "We cannot say whether smells in the room or on the plate have the same effect because we have not tested it."

The researchers found that when food was associated with strong aromas, even of the pleasant natural cream flavoring the researchers used, people took smaller bites.

"Our aroma was a pleasant smelling cream aroma presented at low levels of intensity," de Wijk said. "We have not tested other smells, but believe that effects can be expected when the aroma 'fits' the food, i.e., unusual combinations may not work."

The researchers think this is a feedback loop: when a strong smell is presented in the nose, the participants pared their eating to reduce the amount of flavor they experienced.

The researchers suggest that infusing foods with stronger smells could be used to control portion size: manipulating the odor of food so that it was more fragrant could result in a 5- to 10-percent decrease in food intake per bite. Combining aroma control with portion control could fool the body into thinking it was full with a smaller amount of food, aiding weight loss.

"Aromas added at relatively low levels to the foods may already have the effect," de Wijk said, though they didn't study directly if the individuals actually ate less of the custard in the end.

The study was published today (March 21) in the journal Flavour.