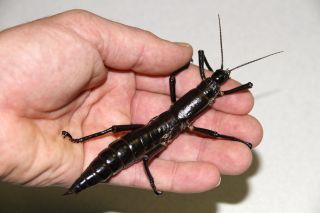 Efforts to resurrect long-extinct species like the woolly mammoth or carrier pigeon have garnered a lot of attention and debate, but in at least one case, a massive insect thought to be long gone has come back all on its own. DNA analysis has revealed that the insect, known as a "tree lobster," is still alive and kicking.

With its thick, worm-like tail and widened, blade-like back legs, the palm-size Lord Howe Island stick insect could easily have crawled out of a horror movie. After rats arrived and tore through the population in 1918, the critters were thought to be have been utterly destroyed, and they were officially declared extinct in 1960. But a few years later, remains of what seemed to be tree lobsters were found on the nearby island of Ball's Pyramid. The finding was largely ignored, however, because the insects looked different from any of the insects from Lord Howe Island, according to new research

It wasn't until 2001 that some live stick insects were found and collected from Ball's Pyramid, and new research published online Oct. 5 in the journal Current Biology confirmed through DNA analysis that the two types of bugs are in fact the same species — contrary to reports, the tree lobster never went extinct. [Gallery: Out-of-This-World Images of Insects]

"In this case, it seems like we're lucky and we have not lost this species forever, although by all rights we should have," study lead author Alexander Mikheyev, a professor in the Ecology and Evolution Unit at the Okinawa Institute of Science and Technology (OIST), said in a statement. "We get another chance — but very often we do not."

The Ball's Pyramid population of the insect, Dryococelus australis, is a darker shade than its Lord Howe Island counterpart, with thinner legs and a longer tail. It's possible that the two islands, which are now about 12 miles (20 kilometers) apart, may have been larger and therefore closer together during an ice age, allowing a population of the stick insects to migrate and become separated from the group that was eradicated by rats, according to a 2011 study published in the journal Proceedings of the National Academy of Sciences. As such, the insects found on Ball's Pyramid are considered to be a so-called "relic population," according to the study.

The Australian government soon aims to enact a $10 million conservation plan on Lord Howe Island that includes eradicating its invasive rat population, in response to the widespread ecological damage the rats have caused to date, driving 12 (previously thought to be 13) invertebrates and five birds to extinction, according to the Lord Howe Island Board. The rats are also threatening another 70 species that are native to the island. Once that's done, conservationists plan to try to reintroduce D. australis to the island.

Bringing a new species to a habitat, even in the name of conservation and restoring a more natural ecosystem, can be rife with political and legal red tape. However, the scientists who verified that the Lord Howe Island and the Ball's Pyramid stick insects are one and the same, argue that their DNA evidence will make the process easier, because there are fewer legislative hurdles for reintroducing a species than there are for bringing in a new one.