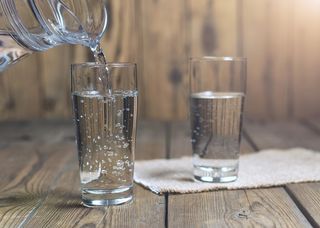 Drinking an extra six glasses of water a day may reduce some women's risk of urinary tract infections (UTIs), according to a new study.

The study found that women who get frequent UTIs could cut their risk of these infections in half if they consumed six additional 8-ounce (adding up to 1.5 liters) glasses of water a day, compared with women who don't increase their water intake.

The study was published today (Oct. 1) in the journal JAMA Internal Medicine. It was previously presented in October 2017 at IDWeek in San Diego, a meeting of several organizations focused on infectious diseases. [27 Devastating Infectious Diseases]

Doctors have long assumed that increasing water intake could lower the risk of UTIs, and they often recommend that women at risk of these infections drink more water. But, until now, the recommendation had not been rigorously studied.

"There's lots of things we recommend to women to reduce the risk of UTIs, but none have really been studied," Dr. Thomas Hooton, lead author of the study and clinical director of the Division of Infectious Diseases at the University of Miami School of Medicine, said at a news conference in San Diego in 2017, when the findings were first presented.

"It's good to know the recommendation is valid, and that drinking water is an easy and safe way to prevent an uncomfortable and annoying infection," Hooton said.

Up to 60 percent of women will develop a UTI in their lifetimes, and about 25 percent will have more than one UTI, the researchers said. Women are generally more prone than men to UTIs because, in women, the urethra is shorter, so it is easier for bacteria to travel from the rectum and vagina to the bladder, the researchers said.

The new study involved 140 healthy women under age 45 who had experienced at least three UTIs in the past year and who typically drank fewer than six 8-ounce glasses of fluids a day. Half of the women were told to drink an extra six 8 ounces glasses of water a day, while the other half didn't make any changes in their water consumption.

In total, the women in the water group were drinking about 11 glasses of water a day, compared with five glasses in the other group.

Drinking more fluids is thought to reduce the risk of UTIs because it increases the rate at which bacteria are flushed from the bladder, and also likely reduces the concentration of bacteria that enter the bladder from the vagina, the researchers said. This means there are fewer opportunities for bacteria to attach to cells lining the urinary tract, Hooton said.

The study was funded by Danone Research, which sells bottled water, and provided bottled water for the study.

However, "it seems clear that any safe-to-drink water will do, including your local tap water," Grady said.

Editor's note: This article was updated to include new information from the published study, as well as comments from Dr. Deborah Grady's editorial.