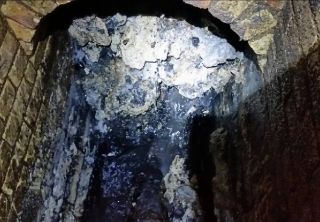 What’s as hard as cement and is currently blocking 820 feet of sewer network in the U.K.? A disgusting mass of solid waste called a "fatberg."
(Image: © Thames Water)

Writer Neil Gaiman's 1997 urban fantasy novel "Neverwhere" imagined sewers underneath large cities as magical shadow worlds, each a home to a host of peculiar individuals and monstrous beasts. However, the reality of what lies below cities in their waste networks is much more disgusting, as a team of Thames Water engineers in the United Kingdom recently found out.

In a sewer region located about 11 feet (4 meters) under the Whitechapel neighborhood in London, workers are just beginning to dismantle an inanimate but uniquely revolting inhabitant — a vast and rock-solid plug of oily waste charmingly known as a "fatberg."

Composed of stinking garbage and grease and weighing in at 143 tons (130,000 kilograms), the Whitechapel fatberg sprawls for 820 feet (250 m) — about the length of two English football fields. This means the blob is more than twice as long as the nefarious iceberg responsible for sinking the Titanic, which was estimated to measure a mere 200 to 400 feet (61 to 122 m) long. [In Photos: The World's Grossest Things]

Removing the mountainous mass — a three-week project — requires a crew of eight people working seven days a week from 8 a.m. local time until 5 p.m. Workers will blast the 'berg with high-powered water jets to break it down, and then vacuum up the chunks — about 22 to 34 tons (30,844 to 19,958 kg) per shift — for removal to a recycling site, Thames Water representatives announced in the statement.

The enormous and slimy blockage built up over time, from grease and oils that were poured down sink drains, joining forces along the way with diapers, condoms, sanitary products, hand wipes and other waste that was flushed down toilets, Matt Rimmer, Thames Water's head of waste networks, said in the statement.

Once these gloppy discards found their way into the sewers, they accumulated and solidified into the consistency of concrete, Rimmer explained, describing the Whitechapel fatberg as "the biggest we've ever seen."

Because in case you were wondering — yes, there have been more.

A 15-ton (13,607 kg) fatberg made headlines in 2013, when it was discovered in a sewer serving the London suburb of Kingston. A supervisor for Thames Water said in a statement that while the agency had removed greater volumes of gloppy garbage from sewers previously, they'd never seen "a single congealed lump" this size.

The more recent — and bigger — Whitechapel fatberg far outweighs the Kingston glob, granting it the dubious honor of being the largest sewer-grown fatberg in British history, according to Thames Water.

Unlike icebergs, which emerge when large sections of ice calve from glaciers near the North and South poles, these greasy, monumental fatberg sewer plugs are formed by people — and only people can prevent fatbergs, Rimmer said in the statement.

"Everyone has a role to play. Yes, a lot of the fat comes from food outlets, but the wipes and sanitary items are far more likely to be from domestic properties. The sewers are not an abyss for household rubbish," Rimmer said.