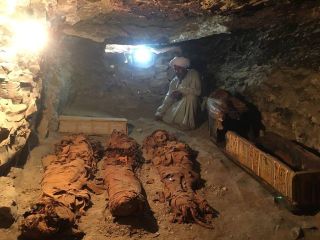 A 3,500-year-old tomb that was originally built for a goldsmith named Amenemhat and his wife has been discovered at the cemetery of Dra' Abu el-Naga in Luxor.
(Image: © Egyptian antiquities ministry)

A 3,500-year-old tomb built for a goldsmith named Amenemhat and his wife Amenhotep has been discovered at the ancient cemetery of Dra' Abu el-Naga in Luxor, the Egyptian antiquities ministry announced today (Sept. 9) at a news conference in Luxor.

Inside the tomb were the remains of several mummies, wooden coffins, skeletal remains, pottery and small statues, according to photos released by the ministry. Jewelry and shabti figurines — which did the work of the deceased in the afterlife — were also found in the tomb, officials said. [See Photos of the Excavation and Goldsmith's Tomb]

The couple lived in the 15th century B.C., during the 18th dynasty, which is part of a period in Egypt's history that modern-day scholars call the New Kingdom, Khaled El-Enany, Egypt's antiquities minister, said during the news conference. During the New Kingdom, Egypt was united under a single pharaoh, and Egypt's power was on the rise.

Excavations inside the tomb are ongoing, and more discoveries will likely be announced in the next month, El-Enany said.

The tomb was discovered by an Egyptian antiquities ministry team led by Mostafa Waziri, the head of the ministry's Luxor department. In April, Waziri's team discovered the tomb of a judge at Dra' Abu el-Naga; Waziri believes that four more tombs will be found close to where the goldsmith's tomb is located, he said during the news conference. "If we keep digging, we'll find four more tombs in the area," Waziri said, adding, "Wish us luck."