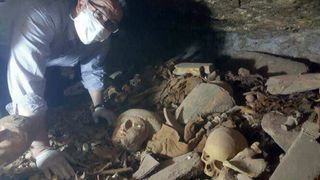 Several mummies and more than 1,000 figurines have been discovered at an ancient cemetery located at Luxor in Egypt, archaeologists reported.

A team of archaeologists with the Egyptian Ministry of Antiquities uncovered the funerary complex during the ministry's ongoing excavations at the site. The funerary complex contains multiple tombs that were originally built for a man named Userhat, who was a judge in Luxor sometime during what modern-day archaeologists call Egypt's New Kingdom (1550–1070 B.C.) period, the ministry said in a statement. [See Photos of the Cemetery and Mummies at Luxor]

During the New Kingdom period, Egypt was unified, and it often controlled a large amount of territory in the Middle East and modern-day Sudan. After the New Kingdom ended, the complex was re-opened and more mummies and burials were put into the structure, the ministry said.

Researchers discovered a labyrinth of tunnels and chambers containing the remains of mummies and assorted human remains, as shown in photos released by the ministry. In some cases, the colors on the mummy coffins are well preserved, despite the passage of millennia.

"We found a large number of ushabti, more than 1,000 of them," Egypt Antiquities Minister Khaled el-Enany told the Agence France-Presse.

Archaeologists also discovered the remains of clay pots in the cemetery.

The ministry's team is led by Mostafa Waziri, the head of the ministry's Luxor department. Excavations are underway that the ministry said will lead to the entire complex being uncovered. The complex is part of a larger ancient cemetery that today is often called Dra' Abu el-Naga.