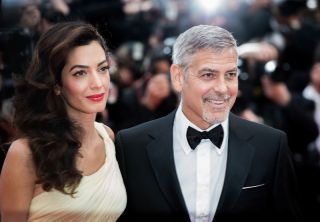 George and Amal Clooney in Cannes, France in 2016.
(Image: © magicinfoto/Shutterstock)

American men are having children at increasingly older ages, according to a new study.

What's more, the percentage of fathers who were older than 40 when they had children doubled during the study period, from 4.1 percent in 1972 to 8.9 percent in 2015.

The rising age of dads in the United States could have public health implications, the researchers said. It's estimated that a man acquires about two new mutations in the DNA of his sperm each year, study co-author Dr. Michael Eisenberg, an assistant professor of urology at Stanford University School of Medicine, said in a statement.

This means that, in theory, children of older dads could be at higher risk of certain genetic conditions. Indeed, previous studies have found "associations between older fatherhood and higher rates of autism, schizophrenia, chromosomal abnormalities, some pediatric cancers and certain rare genetic conditions" in children, Eisenberg said.

Still, there could also be benefits to this trend — one study found that fathers ages 35 to 44 were more likely to live with their children, and thus be more involved in child rearing, than fathers ages 15 to 24, the researchers said. [Trying to Conceive: 12 Tips for Men]

Numerous studies have shown that the age at which women first have children has been on the rise since the 1970s. But far fewer studies have looked at changes in the age of new fathers in recent decades.

The new study analyzed data from more than 168 million U.S. births over a four-decade period. The researchers used birth certificates (available through a government database) to gather information on the age, race/ethnicity and education level of fathers, for each year of the study.

During the study period, the average age of fathers at the time of their child's birth increased for all races/ethnicities and education levels.

Men with more education also tended to be older when they had children; in 2015, the average age of fathers with a college degree was 33 years old.

A similar trend of increasing paternal age has been seen in other countries, including England and Germany.

Factors such as the increased availability of contraception, as well as the increased entry of women into the workforce, may have played a role in the rising age of both men and women at the time of their children's birth, the researchers said.

The rising age of new parents could have an effect on family size, since older people have fewer years left for childbearing than younger people do, the researchers said.

The researchers called for more studies on the health and social implications of older fathers.

The study is published today (Aug. 30) in the journal Human Reproduction.