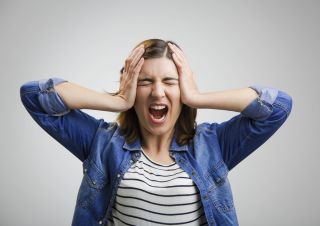 The patterns in your brain may predict how your body physically reacts to stressful situations, a new study finds.

That's important, because some people have stronger physical reactions to stress than others: Their hearts beat faster, and their blood pressure rises more, than you'd see in less "reactive" individuals, according to the study. And this "exaggerated" stress response can have negative consequences in the long run. [10 Things You Didn't Know About the Brain]

People whose blood pressure shoots up in stressful situations are more likely to develop high blood pressure in the future, and they may also have an increased risk of death from heart disease, according to the study, published today (Aug. 23) in the Journal of the American Heart Association.

"It's the people who show the largest stress-related cardiovascular response who are at the greatest risk for poor cardiovascular health, and understanding the brain mechanisms for this may help to reduce their risk," senior study author Peter Gianaros, a professor of psychology at the University of Pittsburgh, said in a statement.

To study this "brain-body" relationship, the researchers performed brain scans on more than 300 adults while also monitoring their physical responses, such as blood pressure and heart rate. During the scans, the participants were asked complete mental tests that were designed to create a stressful experience. For example, the people in the study had to answer questions under strict time constraints.

Next, the researchers used artificial intelligence analyze the results. They found that the people who reacted more strongly to stress physically — in other words, the people whose blood pressure and heart rates rose higher — showed specific patterns of activity in their brains. Indeed, the A.I. reliably predicted how a person's blood pressure and heart rate would change based on the person's brain activity during the stress test, the researchers said.

The study had several limitations, the researchers said. For example, the people included in the study were healthy, middle-age adults who were at low risk for heart disease, so the findings may not apply to less-healthy individuals.

In addition, the study didn't prove that increased activity in certain parts of the brain in response to stress causes physical changes in the body; rather, the research found an association between the two.

Gianaros noted that more research is needed to explore the connections between brain activity and stress responses in the body.

"This kind of work is proof-of-concept, but it does suggest that, in the future, brain imaging might be a useful tool to identify people who are at risk for heart disease or who might be more or less suited for different kinds of interventions, specifically those that might be aimed at reducing levels of stress," Gianaros said.