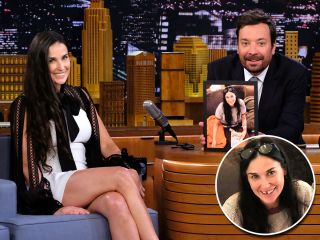 Actress Demi Moore's smile looked a little different recently — she lost her two front teeth, a problem she says was the result of stress. But how does stress cause teeth to fall out?

Moore, who is 54, revealed her dental issues on Monday (June 12) when she appeared on "The Tonight Show Starring Jimmy Fallon."

When asked how she lost her teeth, Moore replied, "I'd love to say it was like skateboarding or something really kind of cool." But instead, she said, the culprit was stress, which she also called "one of the biggest killers in America." [Chew on This: 8 Foods for Healthy Teeth]

Some research has linked stress with dental problems. For example, a 2006 study conducted in Brazil involving 230 people ages 50 and older found a link between psychological stress and dental plaque and bleeding gums. And a 2009 study conducted by researchers in the United States and Canada found that people who had higher levels of stress, depression and the hormone cortisol (which is released in response to stress) also faced a higher risk of gum disease.

These studies were conducted at a single point in time, however, and cannot prove that stress was the cause of the dental problems. But it's possible that stress contributes to dental problems in a number of ways, according to a 2007 review paper. For example, psychological stress can weaken people's immune systems, possibly making them more susceptible to the bacteria that cause gum disease, the review said.

In addition, people who are under stress or experiencing depression might not keep up good oral hygiene habits, or may neglect daily brushing and flossing, according to the 2009 study. That study found that people who neglect their oral care during periods of stress and depression were more likely to lose teeth.

But some experts are skeptical that stress alone can lead to tooth loss.

He noted that if a person grinds his or her teeth because of stress, and also has underlying periodontal disease, the teeth grinding may make the tooth loss worse. But "just stress alone won't do it. You have to have disease there," Burakoff told Live Science.

"If you treat [periodontal disease] early, you can prevent it from getting worse and causing tooth loss," Burakoff said.