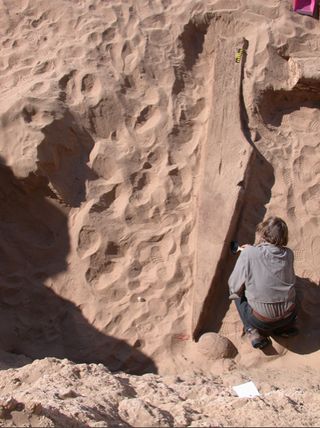 Cargo boxes from the reign of Amenemhet III (1847-1799 BC) partly covered this ship plank at Wadi Gawasis.
(Image: © Cheryl Ward and the University of Naples "L'Orientale"/Boston University Wadi Gawasis Project)

Excavations at an ancient Egyptian shipyard have unearthed remains of the world's oldest seafaring ships.

The 4,000-year-old timbers were found alongside equally ancient cargo boxes, anchors, coils of rope and other naval materials just as old, at what archaeologists are calling a kind of ancient military administration site.

The massive complex, made up of six manmade caves, is located at Wadi Gawasis, a small desert bluff on the Red Sea near the modern city of Port Safaga. According to Cheryl Ward, Florida State University archaeologist and part of the excavation team, the age of the finds is remarkable.

"Older water crafts, like dug-out canoes, have been found throughout the world, but these are the oldest sea-going ships. More significantly, the next oldest [ships ever discovered] in Egypt are 700 years younger," Ward told LiveScience in a telephone interview.

Just as crucial, however, is what the find says about ancient Egypt's naval capacity.

According to Ward, it was widely thought that while ancient Egyptians often traveled along the Nile in smaller river boats, they did not have the technological ability to voyage long distances. Evidence at Wadi Gawasis seems to suggest that they were, in fact, prolific sea-goers like later civilizations in Greece and Rome.

Specifically, hieroglyphs inscribed on some of the cargo boxes indicate that many came from a single origin: the almost mythical city of Punt, whose exact location is still unknown but is thought to lie nearly 1,000 miles away in the southern reaches of the Red Sea.

"Egyptians obviously went to sea frequently during this time, despite the fact that it was a huge undertaking. It required several thousand people trekking supplies across the desert," Ward said.

Before setting out to sea, Egyptians needed to transfer shipping materials, tools, and goods from the main cities along the Nile to the shore, where they were assembled. The caves, measuring 60 to 70 feet on average, were likely created specifically for the task, Ward theorizes.

"You can compare these caves to airport hangars, more than anything else. If all the planes were flown out of the hangars, what would be left over? Parts, tools, bits and pieces; it's the same here," she said. "We also found that the Egyptians had recycled a lot of ship parts and reused them architecturally within."

Timber remains at Wadi Gawasis demonstrate that when ships returned from several months at sea, they were disassembled in the caves and parts inspected for wear and tear. Those pieces that were too badly worn by the burrowing of shipworms were discarded, while those in better shape were kept for later voyages.

The mere presence of shipworm damage, accrued usually during voyages of at least several months, suggests that ancient Egyptians actually spent a lot of time at sea.

"Egyptians even sailed to Lebanon to gather cedar for building their ships," Ward said. "The resin in this wood was thought to prevent damage, but it obviously didn't work very well."