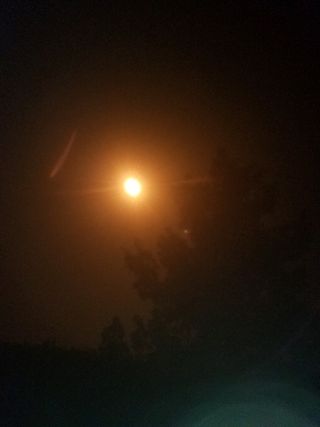 The beginning of the eclipse, as seen from Prineville, Oregon, a city in the path of totality.
(Image: © Barbara Solomon)

As the moon blots out the sun today (Aug. 21) during the total solar eclipse, scientists are busy frantically taking measurements, snapping high-speed photos and chasing the eclipse in superfast jets.

That's because, despite all the fancy telescopes and sun observatories floating in space, total solar eclipses on Earth still offer unique chances to answer basic questions about the sun.

"When the moon blocks out the sun during a total eclipse, those regions of Earth that are in the direct path of totality become dark as night for almost three minutes," Steve Clarke, director of NASA's Heliophysics Division in Washington, D.C., said in a statement. "This will be one of the best-observed eclipses to date, and we plan to take advantage of this unique opportunity to learn as much as we can about the sun and its effects on Earth."

NASA is funding 11 studies that will use data from the eclipse to answer basic questions about the sun's corona, the Earth and the ionosophere, an electrically charged region of Earth's atmosphere.

For instance, the eclipse could help scientists choose the best theory to explain coronal heating – the process by which the sun's halo gets heated to about 1 million degrees Celsius (1.8 million degrees Fahrenheit). The eclipse can also reveal, to an incredibly precise degree, how fast our planet is rotating, Jay Pasachoff, an astronomer at Williams College in Massachusetts, told Quanta Magazine.

Exactly why do these theories still require an old-fashioned astronomical event? It turns out that there are some portions of the sun that are never visible from space, even for sophisticated telescopes like the 7-year-old Solar Dynamics Observatory launched by NASA.

In addition, though there's a 20-year-old telescope called the Solar and Heliospheric Observatory in space that uses a coronagraph, a kind of mask to block out the sun similar to an eclipse, it doesn't work quite as well as the moon. It has three filters that don't completely block out sunlight on an ordinary day. One of these filters never worked, while another is at a different focus, which means that to block out the sun, it also blocks out a wide swath of the region around the sun that includes the surface, Pasachoff told Quanta.

What's more, the edges of the coronagraph scatter light, so the images near the disk are blurry.

"Total solar eclipses remain the only opportunity to study these regions in clear detail in visible light," according to NASA.

And yet, the corona, the outer atmosphere of the sun, is likely the source of space weather that can dramatically affect the Earth, so better understanding the dynamics of the corona could help scientists predict solar storms that affect the Earth's communication systems, NASA says.