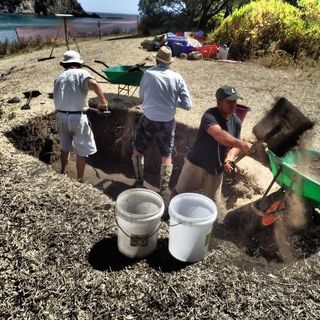 Archeologists in New Zealand are starting to unravel the mysteries of an early settlement near the northern tip of the islands that may have been founded by some of the first Polynesians to arrive in the region around 700 years ago.

The artifacts from Moturua Island include a pendant made from shell that appears to have originated in tropical Pacific waters, which may have been brought by the earliest generations of Polynesian settlers, who developed New Zealand's indigenous Maori culture in the centuries that followed, say the researchers.

The archaeological site, located beside a beach at Mangahawea Bay on Moturua island, about 124 miles (200 kilometers) north of the city of Auckland, was first excavated by archaeologists from the University of Auckland in 1981. [See Photos of the Early Maori Site in New Zealand]

Although some research on the bones of Polynesian dogs ("kuri" in Maori) found at the site was published a few years later, details of the excavation itself were not formally written up, and the bulk of the archaeological work from the site remains unpublished almost 40 years later.

"Everyone's known about it, everyone knows that it's potentially important, but no one's actually been able to do any work on it,” said Andrew Blanshard, a ranger for New Zealand’s Department of Conservation, who initiated the project that led to the latest dig at Moturua Island in February of this year.

Now, some of the artifacts from the 1981 dig, along with bone fish hooks, shell fragments and the bones of animals found in a stone-lined underground oven, or hangi, on the site will undergo scientific testing for the first time, Blanshard said. This is part of an effort to determine if the site may have once been home to some of the first Polynesians to settle in New Zealand, which is thought to have been in the late 13th century, he added.

Among the key findings at the site during the latest excavations are the cooked remains of seals, shellfish and moa — New Zealand's largest flightless bird, now extinct. Moa disappeared from the region due to predation soon after the first humans settled in New Zealand, Blanshard told Live Science.

The researchers are also focusing attention on the type of shell used in a pendant found at the site in 1981, which appears to be a species of pearl oyster — tropical shellfish that are not found in cold New Zealand waters, he said.

If the shell in the pendant is confirmed to be mother-of-pearl, then it may have been brought to New Zealand by some of the very earliest settlers from tropical parts of Polynesia: "But at this stage, it's still very much a wish, rather than something we can prove," Blanshard said.

Blanshard became interested in this archeological "cold case" when he helped build a walking track around the island in 2006.

After being told that the results from the 1981 dig were never written up and published, and that the artifacts from the site remained undated, “I decided that we probably needed to think about doing something a little bit better than that,” he said. [The 25 Most Mysterious Archaeological Finds on Earth]

Blanshard spent nine years locating the artifacts, field notebooks and other research from the 1981 dig to prepare for this year's excavations. Many of the items were found in the archives of universities and government departments in different cities around New Zealand, he said.

The notebooks, in particular, enabled the new team of archeologists to make sense of the field work that was carried out in 1981.

"We were able to redig one of their holes, and have a look at the sides of the hole — what we would call the profile — and that allows us to better understand the samples and artifacts that we've got from the 1981 excavation," Blanshard said, "so it starts to fill in the blanks of the jigsaw."

The excavation at Moturua Island earlier this year was a partnership between New Zealand's Department of Conservation, the government agency Heritage New Zealand, archeologists from the University of Otago at Dunedin in the South Island, and two local Maori clans: Ngati Kuta and Patu Keha.

Heritage New Zealand archaeologist James Robinson, who led the latest dig on Moturua Island, said the involvement of the local Maori was important in helping the researchers to understand the various functional areas of the site, such as the structures of buried storage pits for sweet potatoes, or "kumara," of a type still being used in Maori communities in the area in the 1950s.

Although carbon dating on various items recovered during the latest dig will not be completed for several months, Robinson told Live Science that "we're happy at this stage to say that we're dealing with what's sometimes referred to as an archaic [Maori] or an early Polynesian site."

The latest dig has also revealed signs of archeological layers that indicate the site was occupied successively during different periods of Maori cultural development — an unusual find in New Zealand, where many early sites were often abandoned when some key local resource became scarce, Robinson said.

Initial research from the latest Moturua Island dig was presented at an archaeological conference in New Zealand earlier this year, and scientific papers about the findings, combining the work done by the 1981 and 2017 dig teams, are currently being prepared for publication, he said.

"It's an interesting site — it's one that deserved the attention that led to it being excavated in 1981, but it's really important that these things do get published and analyzed properly," Robinson said.