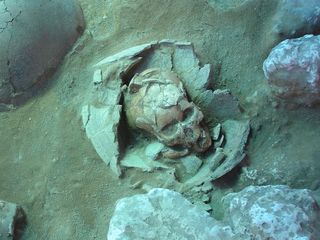 DNA extracted from roughly 3,000-year-old skull found on the island of Vanuatu (shown here) reveals that the first people to settle Polynesia came from Taiwan or northern Philippines. The skull was found inside a vessel made by the Lapita, the ancient culture that colonized all of Polynesia.
(Image: © ANU)

The first settlers of the far-flung Pacific islands of Tonga and Vanuatu likely arrived from Taiwan and the northern Philippines between 2,300 and 3,100 years ago, a new genetic analysis suggests.

Ancient DNA extracted from skeletons at two archaeological sites on the islands helps paint this picture of how the remotest reaches of the Pacific were first colonized.

"The people of Vanuatu today are descended from Asia first of all. They were straight out of Taiwan and perhaps the northern Philippines," study co-author Matthew Spriggs, an archaeologist and anthropologist at the Australian National University, said in a statement.

The new findings suggest that on their route out of Asia, these first settlers may have bypassed closer areas, such as Australia and Papua New Guinea, which have been occupied by ancient populations for at least 40,000 years. [See Images of the Ancient Skeletons from the South Pacific]

"They traveled past places where people were already living, but when they got to Vanuatu there was nobody there. These are the first people," Spriggs said.

As for why they set out on this difficult and dangerous excursion, "that is the $64,000 question; 'we just don't know' would be the honest answer," Spriggs told Live Science in an email. "But some strong ideology must have driven them on." [The 9 Craziest Ocean Voyages]

Exactly who peopled each of these islands and when, however, has remained an issue of hot debate. Some argued that people from the islands of Asia went straight to islands such as Tonga, while others argue that they mixed with people from the Solomon Islands, Papua New Guinea or Australia before reaching their final destination.

To help settle the question, Spriggs and his colleagues analyzed DNA extracted from four female skeletons from Vanuatu and Tonga, which were about between 2,300 and 3,100 years old, and compared it to DNA from hundreds of people from Oceania, as well as from East Asia. Tonga and Vanuatu are about 1,250 miles (2,000 kilometers) apart.

The team found that the first Tongans, who belonged to the so-called Lapita culture that colonized much of Polynesia, shared a common ancestry with the modern-day indigenous people of Taiwan, such as the Ami and the Atayal, as well as the Kanakey of the Philippines, the researchers reported Monday (Oct. 3) in the journal Nature. Similar ancestry was found in the skeletons from Vanuatu. These first settlers had little or no ancestry originating in Papua New Guinea, even though the region is much closer geographically (and many people from Vanuatu speak a language that traces its roots to Papua New Guinea).

However, all modern-day Polynesians do carry some genes inherited from Melanesians, such as the Papuans. Further analysis revealed that the Papuan DNA entered the Polynesian gene pool roughly 1,200 to 2,000 years ago, which suggests Papuans came after the Lapita culture was established and intermarried with the local population, the researchers wrote.

"We should stop using inexact terms like 'Melanesians' and 'Polynesians,' as the only difference is in percentage of Papuan as opposed to Asian genes," Spriggs wrote in the email. "As all Pacific Islanders are a mix of these two groups, I think it is better to call them all Pasifika people (Pacific Islanders) and avoid making distinctions between them that don't mean anything."

Interestingly, in modern-day Oceania, genes from these first pioneers seem to have been largely passed on through women.

"The Lapita culture was probably matrilocal, so that, when people form pairs, females stay in the group where they live but males move, so Papuan males might have come to live in Lapita-like groups," study co-author Pontus Skoglund, a population geneticist at Harvard Medical School in Boston, told Live Science in an email. "Secondly, it might be that secondary migrations into remote Oceania carrying Papuan ancestry were mostly male."

While the skeletons were found on Vanuatu and Tonga, the findings have much broader implications, Skoglund said.

"I expect to see very much the same pattern, at least in other parts of remote Oceania," Skoglund said.