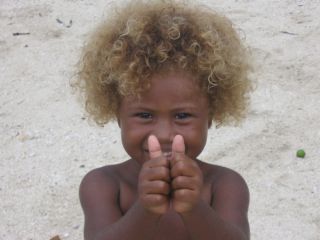 A blond-haired Solomon Island child gives the camera two thumbs up. Research published in the journal Science has uncovered the gene responsible for these fair tresses.
(Image: © © Sean Myles)

Residents of the Solomon Islands in the Pacific have some of the darkest skin seen outside of Africa. They also have the highest occurrence of blond hair seen in any population outside of Europe. Now, researchers have found the single gene that explains these fair tresses.

A single mutation is responsible for almost half of the variation in Solomon Islanders' hair color, the scientists reported Thursday (May 3) in the journal Science. Most strikingly, this gene mutation seems to have arisen in the Pacific, not been brought in by fair-haired Europeans intermarrying with islanders.

"They have this very dark skin and bright blond hair. It was mind-blowing," Myles said in a statement. "As a geneticist on the beach watching the kids playing, you count up the frequency of kids with blond hair, and say, 'Wow, it's 5 to 10 percent.'" [Photos of Beautiful Beaches]

That's not very far off from the proportion of blond-haired people in Europe, Kenny said. The researchers gathered saliva from 43 blond and 42 dark-haired Solomon Islanders to analyze for clues to the genes behind their hair color.

A genome-wide analysis turned up a shockingly clear result, rare in the world of genetics where a single trait can be influenced by dozens or more genes. A gene called TYRP1, which resides on the ninth chromosome of human's 23 pairs of chromosomes, explained 46.4 percent of the variation in the islanders' hair color. (Chromosomes are coiled packets of DNA.) A mutation in this gene affects an enzyme known to be involved in human pigmentation, the researchers found.

This mutation doesn't appear in European genomes, an analysis of genomes from 52 human populations around the world revealed. Rather, it seems to have arisen independently and persisted in the Melanesian population.

That makes the gene different from the one responsible for blue eyes, which arose from a single common ancestor between 6,000 and 10,000 years ago. Before then, there were no blue eyes, they said.

The find solves a nifty genetic mystery, but it also highlights the dangers of assuming that genome findings from one population will translate to another, said study author Carlos Bustamante, a professor of genetics at Stanford.

"If we're going to be designing the next generation of medical treatments using genetic information and we don't have a really broad spectrum of populations included, you could disproportionately benefit some populations and harm others," Bustamante said.

Editor's note: This story has been updated to correct which researchers traveled to the Solomon Islands to collect data. Sean Myles and Nicholas Timpson collected the samples.