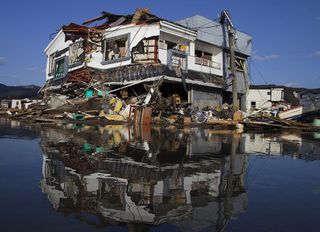 A so-called seismic zone off the coast of Alaska could trigger deadly tsunamis like the one that caused the Fukushima nuclear disaster in Japan in 2011, a new study finds.

Identifying other seismic zones — a region high in seismic activity such as tremors and earthquakes — with these features could help researchers identify areas that could produce catastrophic waves, the scientists added.

Tsunamis are monster waves that can grow to be more than 100 feet (30 meters) high. They are typically caused by earthquakes; for example, the 2004 Banda Aceh earthquake and tsunami killed about 250,000 people in Indonesia, and the 2011 Tohoku earthquake and tsunami that struck offshore Japan killed about 20,000 people and triggered the Fukushima nuclear disaster. [Waves of Destruction: History's Biggest Tsunamis]

Major tsunamis often result at the shallow portions of subduction zones, the areas where one of the tectonic plates that make up Earth's surface dives below another. These crash zones are dangerously active, and these tectonic interactions can cause the world's biggest earthquakes and worst tsunamis.

In the past 20 years or so, researchers have discovered that the seismic zones that lead to tsunamis often have three key features. First, the boundary where the tectonic plates meet is often rough instead of smooth. This keeps the plates from easily slipping past each other, allowing energy to build up between the plates. When this built-up energy finally gets released, it can trigger a major earthquake, according to the researchers.

Second, these danger zones may also possess hard rock rather than sediment near the seafloor and on both sides of the plate boundary. This can permit more motion from an earthquake to occur near the seafloor, for more powerful tsunamis, the researchers said.

A third key feature seen with the 2011 Tohoku earthquake is a series of cracks or faults rooted in the plate boundary. These faults may suggest that the plate boundary is especially active in its shallow portions and more prone to generating tsunamis,said study lead author Anne Bécel, a marine geophysicist at Columbia University's Lamont-Doherty Earth Observatory in the Palisades, New York.

Now, scientists find that a segment of the subduction zone off the coast of Alaska also bears this deadly trio of tsunami-linked features. Its geological structure resembles the kind that was to blame for the 2011 Tohoku tsunami, according to the new study.

The researchers imaged the 120-mile-wide (200 kilometers) Shumagin seismic gap in the Alaska Peninsula that stretches southwest from mainland Alaska. The research vessel Marcus G. Langseth used an array of air guns to generate sound waves, and then used two 5-mile-long (8 km) arrays of seismic sensors to detect the sound waves that reflected off geological features of the Shumagin gap.

Bécel and her colleagues found that the structure of the Shumagin seismic gapmay explain the tsunami-generating earthquake that occurred in its area in 1788. Given the way the Shumagin gap is oriented, a major tsunami from it "will reach Hawaii and possibly other islands in the Pacific — for example, the Marquesas and Austral Islands," Bécel told Live Science. The resulting tsunamis would likely not reach cities such as Anchorage, Alaska; Vladivostok, Russia; Seattle; or Vancouver, British Columbia, she added.

Bécel noted that the Shumagin gap has not released a strong earthquake in 150 years. She added that GPS data monitoring of the Shumagin gap's movements suggest that it is not accumulating enough strain to produce a major earthquake on its own.

Other seismic zones with similar features may include the Kuril subduction zoneoff the Russian coast and potentially the Unimak segment off the Alaskan coast, Bécel said. Further analysis of such areas may improve researchers' "ability to anticipate regions capable of generating large tsunamis," she added.

The scientists detailed their findings online July 24 in the journal Nature Geoscience.