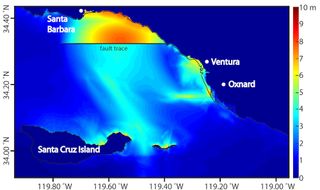 Californians may be used to hearing about the threat of potentially deadly earthquakes, but a new study finds that quake-triggered tsunamis pose a greater risk to Southern California than previously thought.

Tsunamis increase in size as the depth of water in which they occur decreases. Since water depth is usually shallow near coastlines, tsunamis can grow as they approach land, becoming particularly dangerous along heavily populated coastlines, such as those in Southern California, the researchers said. [10 Tsunamis That Changed History]

Scientists focused on the Ventura Basin in Southern California, which has offshore faults that can probably generate earthquakes of magnitude 7 or greater. The researchers created 3D models of ruptures on the 31-mile-long (45 kilometers) Pitas Point and 22-mile-long (35 km) Lower Red Mountain undersea faults.

Although homes and buildings on the coastlines directly opposite these faults would naturally be vulnerable to any tsunamis, until now, additional low-lying areas farther to the east were not necessarily expected to be in harm's way. The new study suggests the cities of Ventura and Oxnard might be under greater threat of tsunami flooding than was previously thought.

In the computer simulation, a tsunami generated by a magnitude-7.7 earthquake on the Pitas Point and Lower Red Mountain faults divided in two. One wave moved north toward Santa Barbara, reaching the city about 5 minutes after the quake. The other wave moved south toward Santa Cruz Island, but the shape of the coastline and seafloor then unexpectedly caused the southward wave to change direction toward the cities of Ventura and Oxnard.

The simulation showed the tsunami could reach up to 23 feet (7 m) high at Ventura and Oxnard and flood up to 1.2 miles (2 km) inland less than 30 minutes after the quake, penetrating twice as far inland at some locations as California's official tsunami-inundation line.

"This is a severe, but plausible, scenario," study lead author Kenny Ryan, a geophysicist at the University of California, Riverside, told Live Science.

Such a tsunami might have occurred after the magnitude-7 Santa Barbara quake in 1812, which was likely caused by an offshore fault. News reports from the time described a huge sea wave inundating the region.

The chances of an earthquake like the one the researchers simulated striking Southern California are low. "The hypothetical earthquake scenario in this study would be among the top three or four largest-magnitude earthquakes ever recorded in California, dating back to the mid-18th century," Ryan said. "Nonetheless, it is crucial to investigate the possible effects from such rare but plausible earthquake and tsunami scenarios."

To better determine the hazards and risks Southern California faces from tsunamis, future research should investigate other earthquake and tsunami scenarios in the region, Ryan said. For instance, undersea landslides in submarine canyons in the region could also generate killer waves.

The scientists detailed their findings in the Aug. 18 issue of the journal Geophysical Research Letters.