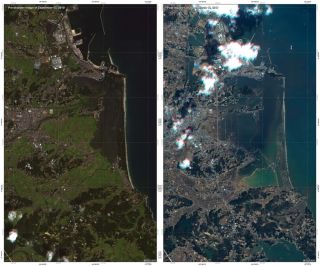 The crisis in Japan could be considered the first "complex megadisaster" the world has ever seen — a potent combination of natural and technological calamities that might become more common in the future.

A megadisaster is a catastrophe that threatens very quickly to overwhelm an area's capacity to get people to safety, treat casualties, protect vital infrastructure and control panic or chaos, said Irwin Redlener, director of the National Center for Disaster Preparedness at Columbia University's Mailman School of Public Health.

"A complex megadisaster, which is what I've been calling the crisis in Japan, is a natural catastrophe overlaid by a technological situation," Redlener told LiveScience. "You have four catastrophes in Japan: the earthquake, the tsunami, the continuing concerns about the instability of the nuclear power plant at Fukushima, and the humanitarian crisis of having hundreds of thousands of people displaced."

Although the world has seen countless natural and man-made disasters — including the 1986 Chernobyl explosion in Ukraine, the worst nuclear accident in history, and the 1984 leak of poisonous chemicals in Bhopal, India, the largest industrial catastrophe to date — "what we haven't had is all this happening simultaneously," Redlener said. [10 Worst U.S. Natural Disasters]

Susan Pharr, a specialist on Japanese politics, civil society and environmental issues at Harvard University, said of the series of Japanese calamities that began March 11: "It's one of the most complex multifaceted disasters of recent times. It's a major problem for the Japanese government to manage both sets of separate crises at the same time."

Unfortunately, Redlener said, "in the future, the likelihood of these complex megadisasters happening is higher every year, because we now have so much high-tech infrastructure everywhere on the planet."

Many nuclear power plants are built in unstable locations, facing either seismic or coastal risks, Redlener explained. "You can also have, say, a major hurricane affecting a significant portion of the electrical grid, leading to significant loss of electrical power that also just got hit by a category 4 or 5 hurricane."

As for the United States, "I would say the country is not well-prepared for a complex megadisaster," Redlener said. "Our plans for responding to and preventing catastrophic events are extremely spotty and random. There is very little uniformity in the quality of preparedness planning and a disturbingly low level of citizen engagement in disaster planning, and this is all compounded by how we have greatly underfunded many of our planning efforts.

"I'm afraid if we did a thorough assessment right now, we'd get a barely passing grade in some places and a less-than-passing grade in others. This is clearly an area we have a lot of work to do in."

Redlener is not hopeful that the crisis in Japan will change Americans' thinking. In his 2006 book, "Americans at Risk: Why We Are Not Prepared for Megadisasters and What We Can Do" (Knopf), he concluded that wakeup calls don't work in the long run.

"We get alarmed, and there's a lot of media attention, and then people move on," Redlener said. "Wakeup calls tend to be like snooze alarms — you wake up, sort of pay attention and doze off again. I keep hoping that people will respond to wakeup calls, and the situation in Japan is a genuine wakeup call, but I remain skeptical that people will actually wake up."

One worrisome nuclear power plant in the United States would be the Indian Point Energy Center in New York state, Redlener said.

"It's the same generation as the Fukushima plant, and it has had numerous safety violations and small leaks, and now we're hearing a lot that it's near a significant earthquake fault," he explained. "We don't consider Indian Point as among the safest plants in the United States, and it's just 35 miles from midtown Manhattan, so millions would need to be evacuated in case of a serious meltdown."

In fact, New York Gov. Andrew Cuomo is now talking about shutting it down, he added, "and I would personally agree that would be the most appropriate course of action right now."