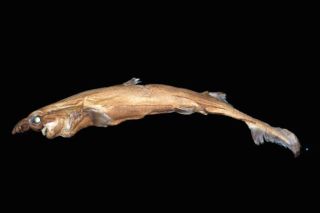 The newly identified shark Etmopterus lailae lives by seamounts off the coast of the Northwestern Hawaiian Islands in the Pacific Ocean. This particular shark is an immature male.
(Image: © Florida Atlantic University)

A glow-in-the-dark shark that has a mouthful of pointy teeth and an impressively large, bulbous nose is also quite a lightweight — about the weight of a pineapple, according to a new study.

It's taken researchers more than 17 years to identify this remarkable species, which lives more than 1,000 feet (305 meters) underwater off the coast of the Northwestern Hawaiian Islands. But researchers said the shark is so distinctive, it was well worth the wait to describe it.

"There are only about 450 known species of sharks worldwide, and you don't come across a new species all that often," study co-researcher Stephen Kajiura, a professor of biological sciences and director of the Elasmobranch Research Laboratory at Florida Atlantic University, said in a statement. "A large part of biodiversity is still unknown, so for us to stumble upon a tiny, new species of shark in a gigantic ocean is really thrilling." [In Photos: Glow-in-the-Dark Sharks]

The roughly 1-foot-long (0.3 m) shark weighs just under 2 lbs. (0.9 kilograms) and is a member of the lanternshark family, a group of sharks that have photophores (light-producing organs) on their bodies. Most lanternsharks are small, including the 1.7-foot-long (0.5 m) glowing ninja shark (Etmopterus benchleyi) that lives in the Pacific Ocean off the coast of Central America.

When the researchers first studied three of the collected shark specimens, they didn't realize they represented a new species. Instead, after they submitted a study on the findings, a reviewer told them that the sharks were a newfound species.

"The unique features and characteristics of this new species really set it apart from the other lanternsharks," Kajiura said. "For one thing, it has a strange head shape and an unusually large and bulgy snout where its nostrils and olfactory organs are located. These creatures are living in a deep-sea environment with almost no light, so they need to have a big sniffer to find food."

In addition, E. lailae has flank markings on its belly and a naked patch without scales on the underside of its snout. It also has a different number of vertebrae and fewer teeth in its mouth compared with other lanternsharks, the researchers found.

One of E. lailae's most stunning features is its ability to glow in the dark. Specifically, the flank markings on E. lailae's belly luminesce, the researchers said. Although it's unclear why lanternsharks such as E. lailae glow, scientists think that it likely helps the sharks recognize mates, camouflage themselves and lure prey toward them.

The study was published online in February in the journal Zootaxa.